Too Cool for School. Jordan Peterson Ditches University of Toronto. 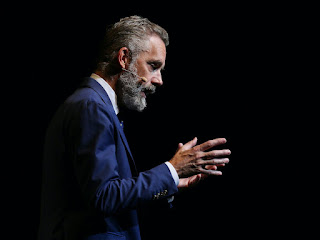 Jordan Peterson has resigned his position as a tenured professor at the University of Toronto but he's not bowing out gracefully.  I can't recite most of this shit so I'll leave you to read it for yourself.  In a nutshell, he's just too damned good for U of T and his "qualified and supremely trained heterosexual white male graduate students" are getting a raw deal.

Peterson laments that there are not enough "BIPOC" (black, indigenous, people of colour) students in the pipeline to fill the assigned slots so his "craven colleagues" must lie to secure research grants.

And they do it constantly, with various rationalizations and justifications, further corrupting what is already a stunningly corrupt enterprise. Some of my colleagues even allow themselves to undergo so-called anti-bias training, conducted by supremely unqualified Human Resources personnel, lecturing inanely and blithely and in an accusatory manner about theoretically all-pervasive racist/sexist/heterosexist attitudes.
Best of all, we've become just a bunch of damned Bolshies.
After the 1917 revolution, the Bolsheviks, relying on the dogmas of Marx and Engels, also said that they would change existing ways and customs, and not just political and economic ones, but the very notion of human morality and the foundations of a healthy society. The destruction of age-old values, religion, and relations between people, up to and including the total rejection of family (we had that, too), encouragement to inform on loved ones — all this was proclaimed progress and, by the way, was widely supported around the world back then and was quite fashionable, same as today. By the way, the Bolsheviks were absolutely intolerant of opinions other than theirs.
In closing, professor pure, blames everyone else, everyone but himself.
And all of you going along with the DIE [Diversity, Inclusivity, and Equity] activists, whatever your reasons: this is on you. Professors. Cowering cravenly in pretence and silence. Teaching your students to dissimulate and lie. To get along. As the walls crumble. For shame. CEOs: signalling a virtue you don’t possess and shouldn’t want to please a minority who literally live their lives by displeasure. You’re evil capitalists, after all, and should be proud of it. At the moment, I can’t tell if you’re more reprehensibly timid even than the professors. Why the hell don’t you banish the human resource DIE upstarts back to the more-appropriately-named Personnel departments, stop them from interfering with the psyches of you and your employees, and be done with it? Musicians, artists, writers: stop bending your sacred and meritorious art to the demands of the propagandists before you fatally betray the spirit of your own intuition. Stop censoring your thought. Stop saying you will hire for your orchestral and theatrical productions for any reason other than talent and excellence. That’s all you have. That’s all any of us have.
Have I missed something. Is that old reptile, Rex Murphy, retiring? Is Jordan heading for the National Post? The irony is that Peterson doesn't mind purity of thought so long as it's his thought. His "craven colleagues" at the Univesity of Toronto weren't buying his shopworn beliefs. Even The Tyee's Andrew Nikiforuk gave Peterson a damned good spanking this week.