Will the Arctic Bid Adieu to Snow? 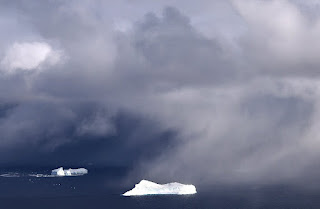 It's happening sooner, decades sooner, than anyone expected.

Rain will replace snow as the Arctic’s most common precipitation as the climate crisis heats up the planet’s northern ice cap, according to research.

Today, more snow falls in the Arctic than rain. But this will reverse, the study suggests, with all the region’s land and almost all its seas receiving more rain than snow before the end of the century if the world warms by 3C. Pledges made by nations at the recent Cop26 summit could keep the temperature rise to a still disastrous 2.4C, but only if these promises are met.

Even if the global temperature rise is kept to 1.5C or 2C, the Greenland and Norwegian Sea areas will still become rain dominated. Scientists were shocked in August when rain fell on the summit of Greenland’s huge ice cap for the first time on record.
The Domino Effect of positive feedback loops:
The implications of a switchover were “profound”, the researchers said, from accelerating global heating and sea level rise to melting permafrost, sinking roads, and mass starvation of reindeer and caribou in the region. Scientists think the rapid heating in the Arctic may also be increasing extreme weather events such as floods and heatwaves in Europe, Asia and North America by changing the jet stream.

“What happens in the Arctic doesn’t stay there,” said Michelle McCrystall at the University of Manitoba in Canada, who led the new research. “You might think the Arctic is far removed from your day-to-day life, but in fact temperatures there have warmed up so much that [it] will have an impact further south.

Much of the land in the Arctic is tundra, where the soil has been permanently frozen, but more rain would change that. “You are putting warm water into the ground that might melt the permafrost and that will have global implications, because as we know, permafrost is a really great sink of carbon and of methane,” said McCrystall.
We need to face some hard truths. These are extinction-grade events. Wrap your head around that. Once you've achieved that, ask yourself why no one in your Parliament, either side of the aisle but especially your prime minister, acknowledges this. He's been in power for six years, promising everything and delivering damn near nothing. We're the worst greenhouse gas emitter in the G7. Our country is one of the top 10 exporters of fossil fuels including insanely dirty coal and bitumen.  Meanwhile every one of the three major parties espouses perpetual exponential growth, the six-lane freeway to the cliff edge.
When will you say "enough"?