The Gun We Point at Our Own Heads 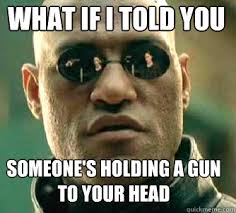 If you're sitting at a table and there's a loaded pistol in front of you, do you pick it up and point it at your own head?  Probably not, unless something has gone terribly, terribly wrong.

How would you feel if someone else was holding that pistol to your head?

But there is a pistol pointed at our heads and, unless we do something about it, we're goners. It's not a Glock. It's fossil fuels and the industry is slowly squeezing the trigger.

Proven fossil fuel reserves are sufficient to generate 3.5 trillion tons of greenhouse gas emissions.  Russia and the United States each have massive reserves of fossil energy sufficient to push humanity through the 1.5C heating limit, sometimes called the "carbon budget."  I have it on reliable authority that Washington and the Kremlin aren't getting along very well these days. After all, if you won't hold the line on nuclear proliferation, you might not be inclined to voluntarily give up a major source of national revenue.  Remember the good old days when we thought the menace to humanity lurked in distant missile silos? We were so naive.

It's a stretch to point fingers at the Russians and the Yanks when Canada and our environmentally woke Liberal government are determined to flood world markets with the lowest value, highest carbon refinable fuel of them all, bitumen. Cognitive dissonance on acid.