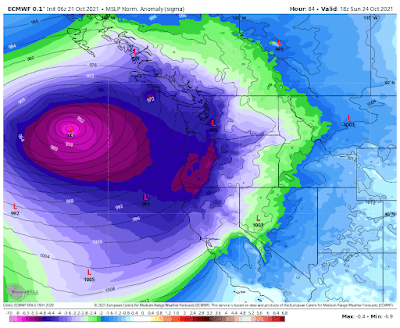 We're not strangers to powerful squalls and extreme winds but what's heading for Vancouver Island over the next few days could be biblical.

Report authors note that the first storm is in the midst of an "explosive cyclogenesis, a drop in pressure of at least 24 millibars in 24 hours - qualifying it in popular parlance as a 'weather bomb." However, this system is expected to do "twice the amount of strengthening" needed to meet that definition.

"While this is the wet season for the west coast, and they are no stranger to strong lows at this time of year, two back-to-back powerhouse systems like these are certainly something to take note of," says Nadine Powell, a meteorologist at The Weather Network.

The storm will also be strengthened by the "remnants from a western Pacific typhoon," explain report authors, which will increase the amount of rainfall.

Low #2 will be stronger, belongs in the Bering Sea, but instead, it'll be southwest of Vancouver Island Sunday PM. It's unprecedented in terms of pressure. Still, lots of questions on the wind field, strongest just south of the centre, decays on approach - it's honestly weird.
Update:  This is weird.  When I awoke this morning everything outside was perfectly still. Not a leaf rustling.  Even the birds seem to be hunkering down in the cedars. There was blue sky but that's gone now. I have this feeling that this eerie stillness is about to change - real fast.