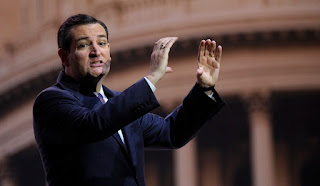 While his home state was in a frozen crisis, senator Ted Cruz headed for the sun and warmth of Cancun. Big problem. Cruz has a face as recognizable as a dog turd on the livingroom carpet.

Photos that rapidly circulated on social media overnight showed a man who could be the senator at an airport and on an airplane. In some photos, a gray face mask was visible that appeared to be similar to one that Cruz was wearing at Biden’s inauguration.

According to the social media postings, Cruz appeared to be in the Houston airport, preparing to board a United Airlines flight from Houston to Fort Lauderdale with continuing service to Cancun.
While outrage at Cruz was mounting online, his former opponent, O’Rourke, highlighted his own efforts to assist Texans during the crisis.

“We made over 151,000 calls to senior citizens in Texas tonight,” O’Rourke said in a Wednesday night tweet. “One of our [volunteers] talked to a man stranded at home w/out power in Killeen, hadn’t eaten in 2 days, got him a ride to a warming center and a hot meal. Help us reach more people, join us tomorrow.”
Caught with his pants down, Cruz went into damage control. He was just trying to be a good father. His kids had the week off from school because of the deep freeze.
"Wanting to be a good dad,” Cruz said, he decided to fly “with them last night and am flying back this afternoon.”
Yeah, sure, Ted.