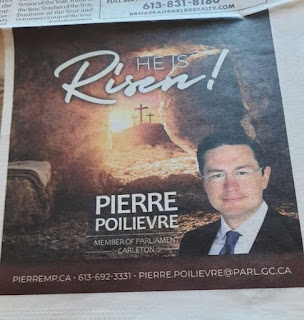 Michael Harris has sized up Pierre Poilievre and concludes that he's a symptom of a sickness the Conservatives just cannot shake.

The Conservatives are still the party of “Make Harperism Great Again.” Instead of taking the rejections of 2015, 2019 and 2021 as signs of the urgent need to reconstruct a party that had grown authoritarian, undemocratic and out of touch, they have doubled down on the policies that have turned them into the perpetual opposition, including fossil fuel worship, environmental myopia, anti-democratic practices and dismissiveness towards Indigenous Peoples in Canada.

Poilievre is more of a Harper protégé than Andrew Scheer or Erin O’Toole ever were. Some Conservative commentators have tried to dry-clean Poilievre, saying he would come to the leadership with a clean slate. That is the stuff of nasal coffee rockets.

Poilievre was Harper’s personal attack chihuahua in the House of Commons, a job he pursued with such alacrity that he elbowed his way into cabinet as minister of state for democratic reform.
...While the usual suspects in the media rhapsodize about the “unstoppable Pierre Poilievre,” they are only partly right. He may be a shoo-in to take the prize on Sept. 10, but his chances of taking the country are next to none. One of the reasons for that has nothing to do with Poilievre. It has to do with the fact that the Conservatives can’t run a leadership convention without disgracing themselves.

When Scheer won, the man who came within a percentage point of beating him, Maxine Bernier, said Scheer prevailed with the help of “fake Conservatives.” Bernier soon left the party, describing it as “morally corrupt.”

On his way to victory, O’Toole called on three police forces to investigate Peter MacKay, his chief rival for the job, alleging theft of confidential information from his campaign.

This time around, Brown was demonized as a liar, and then drummed out of the leadership race altogether this month on allegations of rule-breaking that have yet to be substantiated.

Talk about issuing the verdict before the trial. And rather than postponing the leadership election, the party sent out ballots with Brown’s name on them. There was only one beneficiary of the party’s shenanigans — Poilievre.

What is clear in all of this is that the Conservative Party of Canada is not a national party at all. It remains in essence a western protest party that overachieved for a brief period under Harper, and has since returned to its parochial roots. (Though Harper, despite his reputation for political acumen, only won a single majority government in five tries.)