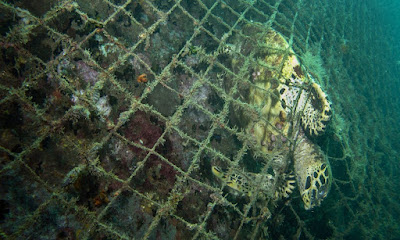 Seabed trawlers are almost universally reviled. Their lead-weighted nets scour the seabed, in the process destroying almost everything in their path. This 2014 article from The Guardian focuses on the problem:

The Firth of Forth was once home to vast beds of oysters, for example. None remains. Similarly, the Firth of Clyde once abounded with fish, shellfish, whales and porpoises. Today its seabed is barren and its fish stocks have disappeared. "Nothing worth catching is left," states Callum Roberts in his book, Ocean of Life. "The Firth of Clyde gives us a stark vision of a life without fish."

And as bottom trawling and dredging continues, such a fate awaits most other UK inshore fisheries. "Trawlers have transformed life on the seabed, converting three-dimensional, complex habitats rich in coral, sponge and sea fan to endless monotonous expanses of shifting gravel, sand and mud," adds Roberts. Nor is the damage confined to the seabed. Stocks of fish – robbed of any hiding places on the seafloor – have suffered correspondingly. Common skate, angel shark, halibut and wolfish, once plentiful, have virtually disappeared from British waters while bottom fish – which cling to the seabed – such as cod, haddock and turbot, have suffered drastic declines in numbers.
This is not a British problem. Canada also supports bottom trawling.
Large bottom trawl nets are currently being dragged along Canada’s seafloor, wiping out vulnerable fish stocks, coral reefs and other invaluable ecosystems. Non-target and endangered species are falling victim to these nets and are tossed overboard as bycatch. Furthermore, bottom trawling is responsible for releasing more than one billion tonnes of carbon dioxide a year by disrupting carbon stored in the seafloor.
Bottom trawling is irresponsible. It's irresponsible of the fishing fleets that savage the sea bed. It's if anything even more irresponsible of the 'Chamber of Commerce' governments that condone it, including the current bunch in charge in Ottawa.
Fortunately this ecological vandalism ends at what Tar Sanders call "tidewater." What, it doesn't? That's right. We practice the same sort of "fast buck" environmentalism on dry land also. Think of the tens of thousands of orphan oil wells or the tailing ponds of the Athabasca Death Sands. Think about the agricultural run off and the scourge of algae blooms on our lakes and rivers. The list goes on.
Comment Response:
Lorne, you might find the post I did on "longtermism" interesting as it explores a reality based on sanity that is the opposite of the regimes we have adopted.
Today's Canadians have exploited the legacy our ancestors created for our future, we have squeezed everything possible out of the present and we have robbed future generations of what was rightfully theirs.