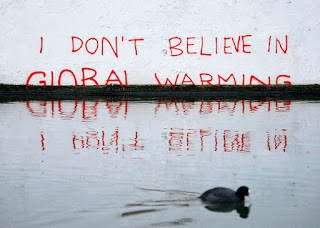 Whether you like it or not, they have you firmly in their crosshairs.

"They" are the fossil energy giants and they're planning to unleash "scores of 'carbon bomb' oil and gas projects that would drive the climate past internationally agreed temperature limits with catastrophic global impacts."

...data shows these firms are in effect placing multibillion-dollar bets against humanity halting global heating. Their huge investments in new fossil fuel production could pay off only if countries fail to rapidly slash carbon emissions, which scientists say is vital.

The lure of colossal payouts in the years to come appears to be irresistible to the oil companies, despite the world’s climate scientists stating in February that further delay in cutting fossil fuel use would mean missing our last chance “to secure a liveable and sustainable future for all”.

Experts have been warning since at least 2011 that most of the world’s fossil fuel reserves could not be burned without causing catastrophic global heating.

In 2015, a high-profile analysis found that to limit global temperature below 2C, half of known oil reserves and a third of gas had to stay in the ground, along with 80% of coal.

...In April, shocked by the latest IPCC report that said it was “now or never” to start slashing emissions, [UN Secretary General Antonio] Guterres launched an outspoken attack on companies and governments whose climate actions did not match their words.

“Simply put, they are lying, and the results will be catastrophic,” he said. “Investing in new fossil fuels infrastructure is moral and economic madness.

Flogging a dead horse, I have to ask you whether you will stand for this.

Flashback to November, 2015, the Paris climate summit. We had a new prime minister, the Luddite had been sent packing.  The new guy took the floor to proclaim "Canada's back." The community of nations clasped hands and pledged to limit global warming to not more than 1.5 degrees Celsius, a target that offered an even chance of averting cataclysmic, runaway global warming.  Heady days.

In attendance was the esteemed head of the Potsdam climate institute, Hans Joachim Schellnhuber.  A reporter cornered him to ask if the 1.5 C target was realistic. Was it pie in the sky?

Schellenhuber said it was possible on one condition. It would require the petro-states to dismantle the fossil energy giants. He used the term "an induced implosion." Only governments, acting in concert, had the power to end the fossil fuel economy.  Humanity's future was in our leaders' hands.

Now, six years later, instead of imploding the fossil energy industry, our leaders are promoting, enabling its expansion. They pretend that they can still save humanity. They can still arrest global warming. The can avert climate catastrophe. Words.

Instead of staunching the deluge of hydrocarbons, our leaders stand mute as the industry tosses carbon bombs at humanity. They even build new pipelines to expand the export of a particularly dirty fossil fuel, bitumen, ignoring science that warns it must be left in the ground. At the same time they open the Atlantic seabed for ever more drilling, perhaps another million barrels a day.  Deeds.

When deeds so blatantly contradict words, the words are lies. Promises are broken. Trust is destroyed. And this on the most existential threat to humanity in the history of our civilization.

Until I can get this Blogger glitch sorted out, I will respond to  comments at the end of the post. It's far from perfect but it's the best temporary fix I can think of.

John B. - I've been thinking of posting something about Canada's Great Migration to the Right.  The Conservatives are morphing into trailer trash Republicans. Liberals how serve as Conservative Lites. The NDP, in their tragic quest for power, have re-imagined themselves as Latter Day Liberals. The Left, as we've known it for so many decades, now stands abandoned.

Harper's overarching goal was to move Canada's political centre well and permanently to the Right. I think he succeeded as the Liberals and the NDP fell into line.