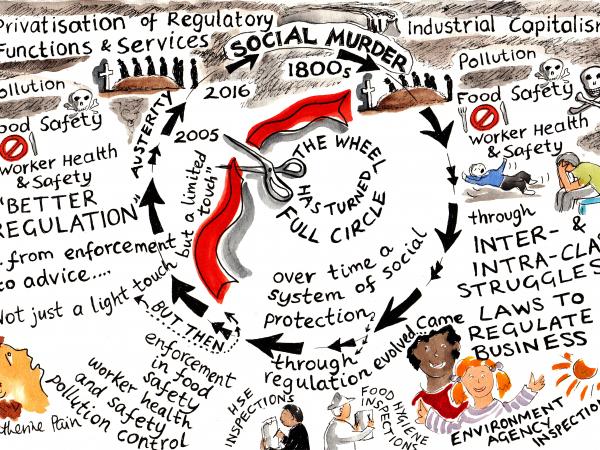 Why do our governments, elected to office by ordinary citizens, abet those who would harm us? Chris Hedges accuses them of "social murder." It's mass murder.

The global catastrophe that awaits us, already baked into the ecosystem from the failure to curb the use of fossil fuels and animal agriculture, presage new, deadlier pandemics, mass migrations of billions of desperate people, plummeting crop yields, mass starvation and systems collapse.

As grim a future as you can imagine.

The facts are incontrovertible. Each of the last four decades have been hotter than the last. In 2018, the UN International Panel on Climate Change released a special report on the systemic effects of a 1.5 degrees Celsius (2.7 degrees Fahrenheit) rise in temperatures. It makes for very grim reading. Soaring temperature rises — we are already at a 1.2 degrees Celsius (2.16 degrees Fahrenheit) above preindustrial levels — are already baked into the system, meaning that even if we stopped all carbon emission today, we still face catastrophe. Anything above a temperature rise of 1.5 degrees Celsius will render the earth unhabitable. The Arctic ice along with the Greenland ice sheet are now expected to melt regardless of how much we reduce carbon emissions. A seven-meter (23-foot) rise in sea level, which is what will take place once the ice is gone, means every town and city on a coast at sea level will have to be evacuated.
Social Murder, or paying the Butcher's Bill.
As the climate crisis worsens, the political constrictions will tighten, making public resistance difficult. We do not live, yet, in the brutal Orwellian state that appears on the horizon, one where all dissidents will suffer the fate of Julian Assange. But this Orwellian state is not far away. This makes it imperative that we act now.

The elites thrive in this system, as long as they serve the dictates of what Lewis Mumford called the “megamachine,” the convergence of science, economy, technics and political power unified into an integrated, bureaucratic structure whose sole goal is to perpetuate itself. This structure, Mumford noted, is antithetical to “life-enhancing values.”
A decade from now we will look back at the current global ruling class as the most criminal in human history, willfully dooming millions upon millions of people to die, including those from this pandemic, which dwarf the murderous excesses of the killers of the past including the Europeans that carried out the genocide of the indigenous peoples in the Americas, the Nazis that exterminated some 12 million people, the Stalinists or Mao’s Cultural Revolution. This is the largest crime against humanity ever committed. It is being committed in front of us. And, with few exceptions, we are willfully being herded like sheep to the slaughter.

It is not that most people have faith in the ruling elites. They know they are being betrayed. They feel vulnerable and afraid. They understand that their misery is unacknowledged and unimportant to the global elites, who have concentrated staggering amounts of wealth and power into the hands of a tiny cabal of rapacious oligarchs.

The rage many feel at being abandoned often expresses itself in a poisoned solidarity. This poisoned solidarity unites the disenfranchised around hate crimes, racism, inchoate acts of vengeance against scapegoats, religious and ethnic chauvinism and nihilistic violence. It fosters crisis cults, such as those built by the Christian fascists, and elevates demagogues such as Donald Trump.
Setting Us Against Each Other.
Social divisions benefit the ruling class, which has built media silos that feed packaged hate to competing demographics. The greater the social antagonisms, the less the elites have to fear. If those gripped by poisoned solidarity become numerically superior — nearly half of the American electorate rejects the traditional ruling class and embraces conspiracy theories and a demagogue — the elites will accommodate the new power configuration, which will accelerate the social murder.
The Pervasive Evil in Our Midst.
The evil that makes this social murder possible is collective. It is perpetrated by the colorless bureaucrats and technocrats churned out of business schools, law schools, management programs and elite universities. These systems managers carry out the incremental tasks that make vast, complicated systems of exploitation and death work. They collect, store and manipulate our personal data for digital monopolies and the security and surveillance state. They grease the wheels for ExxonMobil, BP and Goldman Sachs. They write the laws passed by the bought-and-paid-for political class. They pilot the aerial drones that terrorize the poor in Afghanistan, Iraq, Syria, and Pakistan. They profit from the endless wars. They are the corporate advertisers, public relations specialists and television pundits that flood the airwaves with lies. They run the banks. They oversee the prisons. They issue the forms. They process the papers. They deny food stamps and medical coverage to some and unemployment benefits to others. They carry out the evictions. They enforce the laws and the regulations. They do not ask questions. They live in an intellectual vacuum, a world of stultifying minutia. They are T.S. Eliot’s “the hollow men,” “the stuffed men.” “Shape without form, shade without color,” the poet writes. “Paralyzed force, gesture without motion.”

These systems managers made possible the genocides of the past, from the extermination of Native Americans to the Turkish slaughter of the Armenians to the Nazi Holocaust to Stalin’s liquidations. They kept the trains running. They filled out the paperwork. They seized the property and confiscated the bank accounts. They did the processing. They rationed the food. They administered the concentration camps and the gas chambers. They enforced the law. They did their jobs.

These systems managers, uneducated in all but their tiny technical specialty, lack the language and moral autonomy to question the reigning assumptions or structures.
To Resist, To Say "No."
How do we resist? Why, if this social murder is inevitable, as I believe it is, do we even fight back? Why not give in to cynicism and despair? Why not withdraw and spend our lives attempting to satiate our private needs and desires? We are all complicit, paralyzed by the overwhelming force of the megamachine and bound to its destructive energy by our allotted slots within its massive machinery.”

Yet, to fail to act, and this means carrying out mass, sustained acts of nonviolent civil disobedience in an attempt to smash the megamachine, is spiritual death. It is to succumb to the cynicism, hedonism and numbness that has turned the systems managers and technocrats that orchestrate this social murder into human cogs. It is to surrender our humanity. It is to become an accomplice.
Those familiar with this blog will be aware of the many times we have wrestled with the breakdown of social cohesion and, in its wake, the extinction of progressive democracy and the rise of an ersatz form of tribalism.  Plainly this has not happened through some fluke. It is a thoroughly engineered result. It is the vehicle by which society can be mined of both wealth and power.
This has a passing resemblance to a conspiracy theory, the greatest and gravest conspiracy tale of all time.  Only this conspiracy is unfolding before our eyes and we know it.
We have had a meaningful understanding of the climate crisis for 30 years and what have we done about it? Essentially nothing.
We saw the face of 1.2 degrees Celsius of heating last summer as on consecutive days we set three consecutive heat records before, on the fourth day, the town where it happened was erased by fire. We saw it in the wildfires that grew ever larger and more voracious, belching clouds of smoke laden with Pm 2.5 particulate matter that spread coast to coast. We saw it in the atmospheric rivers that battered British Columbia with enough force to tear down highways and railways, flooding a vast valley, killing livestock, even forcing the evacuation of a small city.  We see it in the creatures that now populate the Salish Sea - the great whales, the transient orca, the megapods of dolphins, masses of sea lions and more, all migrating north from warming waters to the south. That, we're told is our new normal, at least until something more severe takes hold.
Now imagine 1.5 degrees Celsius.
We are in the grips of a truly existential emergency. There is no "second place" on this one. You either win or you lose and, if you lose, you lose so much. Even the future of your grandkids hangs in the balance.
And yet our government holds in its hand a smoking gun. It's a pipeline intended to flood world markets with the carbon-filthiest, highest cost, lowest value ersatz petroleum, bitumen.  That is a government in service to special interests to the peril of the public interest.
For years I've bemoaned the decline in political governance in Canada. The visionaries are long gone. The leaders of courage and promise are no more. Today we are not governed but ruled. We are ruled by technocrats, petit fonctionnaires, grey suits stuffed with wet cardboard.
The A-list talent is no longer drawn to politics. Look at what we've had in their place - Stephen Harper, Michael Ignatieff, "The Twins" - Scheer and O'Toole, and, of course, Justin Trudeau.  An oil company mail room boy, an academic slacker, an insurance agency counter clerk, an air force navigator and a highschool drama teacher. Not a lot of Nobel-grade leaders there.
We've gone from Pierre Trudeau to Justin Trudeau, downhill all the way.
This is the sort of leadership we have to guide us through the gravest emergency in the existence of human civilization. We're in trouble.