Playing To the Fringe. Like the Republicans Before Them, Canada's Tories Cozy Up to Extremists 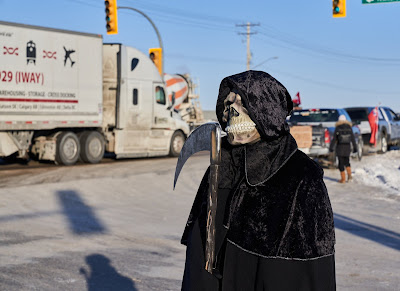 It's no secret that the prairie provinces are the Conservative heartland. It's also no secret that some six million Canadians, ardent fans of Donald Trump and Trumpism, are mainly from those same provinces. Sadly, these far right loonies have become an indispensible part of the Tory base.

The near-insurrection of Jan. 6, 2021, when thousands of pro-Trump supporters swarmed the U.S. Capitol and left at least seven people dead, should have been a wakeup call for anyone who cares about the state of their own democracy.

But if the Conservative Party of Canada’s recent behaviour is any indication, it’s more than happy to keep hitting the snooze button — and continue playing to the base instincts of an increasingly unhinged fringe movement.
Conservatives’ habit of misrepresenting reality and riling up their base with false information and fake controversies, key ingredients in the toxic stew of Trumpism, has reached a dangerous new level with the truck convoy that’s currently winding its way east towards Ottawa. While that convoy was ostensibly animated by a federal vaccine mandate for truckers that went into effect on Jan. 15, its impact on supply chains and the availability of food on Canadian grocery store shelves, it has quickly mutated into something much bigger — and uglier.
This fusion of hyperbole, hatred and fear-mongering is exactly the sort of thing the Republican Party has traded in ever since Donald Trump stepped onto that Trump Tower escalator in 2015. Since then, both he and the Republican Party he controls have routinely treated the truth and those who tried to defend it with open contempt.
Blatant lies and deliberate attempts to mislead Canadians are a threat to our democracy. But what makes the CPC’s recent conduct even more dangerous is the obvious desire on the part of its key members, including former leader Scheer and potential leadership front-runner Pierre Poilievre, to provoke a portion of the Canadian public that’s already inclined towards anti-social behaviour — and direct their fury towards the prime minister.
...As Caroline Orr made clear in a recent piece, the threat of political violence coming from the far right in Canada has only gotten bigger. “The anti-vaccine movement has become a vector for radicalization,” she wrote, “and national security experts are concerned about what comes next.”

In other words, we may be on the cusp of our own Jan. 6 moment.
If it helps them win an election, or at the very least fend off the surge on their far-right flank from the People’s Party of Canada, the Conservative Party of Canada seems content to keep pushing us down this dark road. The rest of the country has no choice but to wait and see where it takes us.