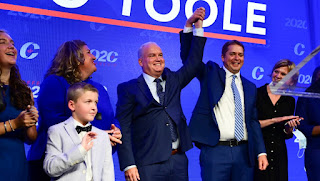 Conservatives are wondering how in hell they lost the last election?  A post-mortem review might have them asking how they did so well.

The last Conservative campaign suffered from eroded trust after years of party infighting, poor outreach toward ethnic communities in urban centres and disappointing communication from leader Erin O’Toole in the final weeks of the last federal election.

— An excessive use of a TV studio created in an Ottawa hotel from which he hosted dozens of town halls and campaign announcements instead of in-person events.

— In the final two weeks of the campaign, O’Toole’s communication became vastly less effective, with observers noting he “didn’t look like himself, was too heavily scripted and over-coached.”

— Still in the final stretch of the campaign, the leader’s responses to questions became overly “message-oriented” instead of sounding genuine and providing “direct” answers.
The report suggests that if only Canadians knew more about O'Toole they would warm to him. Really?