NASA - It's Going to be Bad, But We Can Still Make It So Much Worse 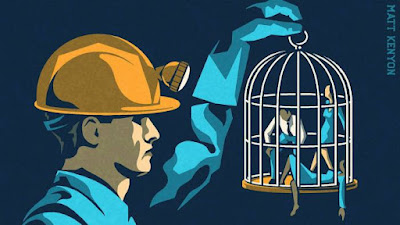 NASA is predicting more extreme weather events, more and hotter heat waves, more intense rainfall, more coastal floodings - pretty much the worst year we've endured, only worse. And the US space agency says last summer in British Columbia was the canary in the mine.

In an interview with Global News’ Jackson Proskow, Gavin Schmidt, Director of NASA’s Goddard Institute for Space Studies said that the world has reached a plateau of warming that’s actually part of an ongoing continued warming. This is because of the increases in greenhouse gases, notably carbon dioxide and methane, he said.

“We’re seeing global warming…having impacts directly on weather extremes (as shown by) the heat waves in Western Canada last summer, changes in coastal flooding, and changes in intense precipitation,” said Schmidt.
Out of the frying pan and into the fire. Last February was North America's coldest since 1994 and then, well.
Overall, the February 2021 temperature departure for North America was -1.34 C (-2.41 F) — North America’s coldest February since 1994, according to the NASA report on how a warmer climate has impacted the weather.

“The extreme cold temperatures caused ruptures in water mains and cracked rail lines and set records for energy demand,” the report stated.
According to the World Meteorological Organization, Lytton, B.C., set a new national maximum temperature record for three consecutive days. The latest record was 49.6 C (121.3 F) set on June 29 in 2021, which is a maximum temperature more typical of summer temperatures in the Middle East.

The NASA report stated that “the intense heat was blamed for close to 800 reported deaths and hospitalizations related to the heat across Western Canada. In the U.S., preliminary reports stated that the heat affected crops such as berries and wheat.”
According to Schmidt, the only way to get global warming to slow down is to stop emitting greenhouse gases, notably carbon dioxide.

“We’re not going to go back to the temperatures that we had in the 1980s. That ship has pretty much sailed, but we can stop making it worse,” said Schmidt.
Authors of our own misfortune.

“One piece of science that’s helpful and I think gives us a little bit of hope is that…the increases in temperatures that we may see are almost entirely due to the future emissions that we’re going to make…so we are in control of our destiny,” said Schmidt.