Justice Corrupted, Right Out in the Open 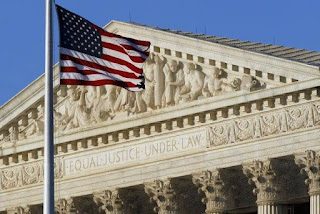 During his presidency, Donald Trump set out to thoroughly corrupt the US Supreme Court by stacking the bench with reliable, hard right justices, people who could be counted on to do the "right" thing. The integrity of the highest court of the land was irrelevant. The idea of turning the USSC into a political agency was of no moment.

This post is about how one of Trump's appointments, the controversial Brett Kavanaugh, has run afoul of the radical right movement that has taken over the Republican Party.

Fox News host Tucker Carlson got the ball rolling Thursday night by muttering that Kavanaugh was a “cringing little liberal.”

Trump Jr. was quick to pile on, tweeting that "the left broke Kavanaugh. They turned him into a Roberts."

Florida governor, Ron DeSantis, added: “Honestly, Roberts and Kavanaugh didn’t have a backbone on that decision — that’s the bottom line.”

The Mango Mussolini himself slams Kavanaugh:

“In retrospect, he just hasn’t had the courage you need to be a great justice,” Trump said. “I’m basing this on more than just the election.”
So much for America's vaunted system of checks and balances. Farewell outgoing democratic republic.  Greetings Lord of the Flies.