Is This "Climate Departure"? 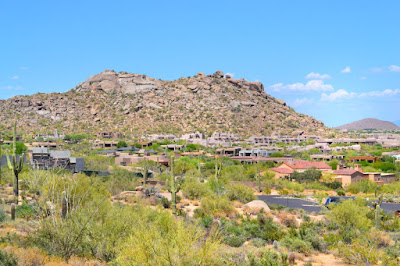 In 2013, climate scientists at the University of Hawaii, analyzing a small mountain of recent data, discerned change afoot. They named it "climate departure." It is a region's departure from its previous climate to a new, considerably hotter climate. After the departure point, there would be no more cold years. Every year after departure would be hotter than the hottest year pre-departure.

The scientists thought departure could set in during the early 2020s, around 2023. It would begin in equatorial/tropical regions including the Caribbean and Central America, possibly the southern US included. Over the following 20 to 25 years departure would spread to the temperate zones.

A surge in heat-related deaths amid record-breaking summer temperatures offers a “glimpse into the future” and a stark warning that one of America’s largest cities is already unlivable for some, according to its new heat tsar.

Scorching temperatures have made summers increasingly perilous for the city’s 1.4 million people, with mortality and morbidity rates creeping up over the past two decades, but 2020 was a gamechanger when heat related deaths jumped by about 60%.

Last year, after another deadly summer, the mayor announced the region’s first dedicated unit to tackle the growing hazard of urban heat, which also threatens the city’s economic viability.
By 2050, the American south from Texas to Florida is expected to receive 50 or more additional days of above 90 degree F temperatures.  Phoenix, however, gets off easy - only 25 more additional days of high temps.
The heating is compounded by America's water crisis that stretches from California to Florida and the Everglades.  The prairie states, America's grain belt, are increasingly reliant on groundwater even as the main aquifers including the mightly Ogallala are running low. Further west, where the Colorado River provides the water supply for 40 million Americans, the water is running out. Even the Hoover Dam is at lows not seen since it was being constructed.  One of the states reliant on the Colorado is, you guessed it, Arizona where this year's water ration has been cut by 20 per cent.  Yeah, that's right. Across the southwest water is being rationed.
Across the US south (and many other parts of the world) water wars are breaking out. In America the wars are, fortunately, fought in courtrooms.
Currently the U.S. Supreme Court has on its docket a case between Texas, New Mexico and Colorado and another one between Mississippi and Tennessee. The court has already ruled this term on cases pitting Texas against New Mexico and Florida against Georgia.

Climate stresses are raising the stakes. Rising temperatures require farmers to use more water to grow the same amount of crops. Prolonged and severe droughts decrease available supplies. Wildfires are burning hotter and lasting longer. Fires bake the soil, reducing forests’ ability to hold water, increasing evaporation from barren land and compromising water supplies.
Some might have thought it was folly to build cities such as Las Vegas, Phoenix and Scottsdale, in the desert but, when they were established, the Hoover Dam and Lake Mead held abundant volumes of water, the Colorado met every user's demands, its waters even reached the sea. That was then...