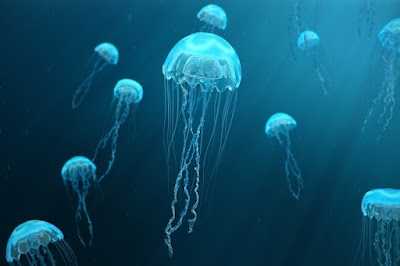 For most of the world the influx of jellyfish in local waters has become a real problem. Like most marine life, jellyfish are migrating into waters once too cold for their liking.  For years, swarms of jellyfish have appeared off the coast of Ireland where they attack fish farms, devastating a once lucrative fishery.

Around the world, jellyfish blooms are damaging the marine ecosystem.  The culprits are many - eutrophication (nutrients spilled into the marine environment), warming seas, climate change, overfishing and habitat modification, among others.  As jellyfish die off they contribute to ocean acidification and reduction of dissolved oxygen (hypoxia) that further damage marine environments.

But, as I wrote, there's good news. Jellyfish are a popular foodstuff in many Asian countries.  According to Deutsche Welle, jellyfish have become a multi-billion dollar industry.

Zero calories but oodles of protein. As we empty the seas of everything else, slime could become a delicacy.

Meanwhile, Australian beaches are under siege from bluebottles, a relative of the Portuguese Man o' War. They've been washing up in "gobsmacking numbers."  Warming waters are blamed for the inundation.