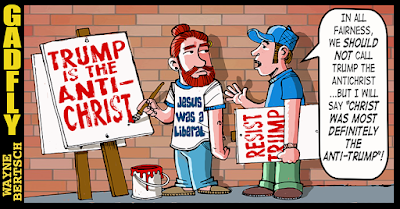 Progressive journalist and radio show host, Thom Hartmann, thought he'd dodged a bullet when he skirted a listener's question whether Donald Trump is the Antichrist.  Then his switchboard was flooded with others asking the very same question.

It’s a fascinating question, however, whether put literally or metaphorically.

Asking the question literally requires a belief in the actual reality of a Son-of-God Christ figure and of an Antichrist opponent of nearly equal but opposite power. This sort of thing fills the Bible, and I’ll get to that in a moment.

But first consider the question from the secular perspective, which argues these two terms represent, at their core, metaphors for the embodiment of good and evil.
Hartmann is reluctant to call Trump the Antichrist. He sees plenty of evidence, however, that Trump is an Antichrist. For evidence, Hartmann relies on the Sermon on the Mount. 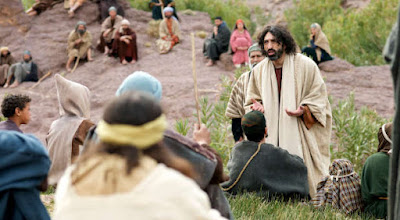 Jesus’ disciples had gathered around him in a private and intimate setting.

Finally, they thought, they could ask him, straight up, the question that had been haunting them, particularly now that the Roman authorities were starting to talk about punishing or even executing them: How they could be sure to hang out with him in the afterlife?

Jesus told them that at the end of days he’d be sitting on his throne separating the sheep from the goats “as a shepherd divideth.”

The nations of “sheep” would go with him to heaven, the “goats” to hell.

At this point, his disciples — who had never, ever seen Jesus hungry, thirsty, homeless, sick or naked — freaked out. Whoa! they shouted. We’re screwed!

This is the only place in the Bible where Jesus explicitly tells his disciples what acts they must perform, in their entirety, to get into heaven.

Feed the hungry, care for refugees, house and clothe the homeless, heal the sick, have compassion on those in prison.

And it’s a list that is quite literally the opposite of everything that Donald Trump advocates, stands for, and has done in his career.
Hartmann concludes that Trump may not be the Biblical Antichrist but he sure as hell is a political Antichrist.