The Year in Climate. What We See and What We Don't See. 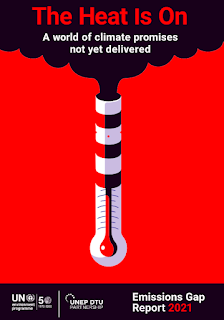 Deutsche Welle has a recap of the global climate emergency in 2021.  The summary touches on what I would call the "big ticket" events, the ten most costly climate disasters.

These are First World weighted numbers. They reflect cost in preference to value. A house in Louisiana and a corrugated metal shack occupied by a Rohingya refugee in Bangladesh have vastly differing costs compared to their value to the occupants. This apples and oranges contrast makes developed world disasters far more important than Third World counterparts where all manner of other problems compound loss.

Another problem with these year-enders is that they fail to capture the low to mid-grade changes underway, the really dangerous and costly shifts that are often erased from our conscience by humanity's ingrained memory block, "creeping normalcy."

Politicians use the term "creeping normalcy" to refer to slow trends concealed within noisy fluctations. If the economy, schools, traffic congestion, or anything else is deteriorating o­nly slowly, it's difficult to recognize that each successive year is o­n the average slightly worse than the year before, so o­ne's baseline standard for what constitutes "normalcy" shifts gradually and inperceptibly. It may take a few decades o­n a long sequence of such slight year-to-year changes before people realize, with a jolt, that conditions used to be much better several decades ago, and that what is acdepted as normalcy has crept downward.

Jared Diamond, Collapse, p. 425.
The big ticket events are important but not in their own right, not as standalone events. They're important as evidence of the small ticket changes every year, every decade that too often go unnoticed. It's the incremental change that most threatens civilization yet is less apt to draw the attention of our leaders who, as we have seen so often, prefer to kick this can down the road.
Incremental climate change comes in an incredibly broad range of forms or types. They may appear unconnected and, hence, less consequential yet they have a cumulative nature. They need not be either symbiotic or synergistic. It matters little if they combine to sap our resilience or simply do it individually. The damage is still cumulative.