The Stench of Politicization. Sotomayor Calls Out the Stacked Deck US Supreme Court. 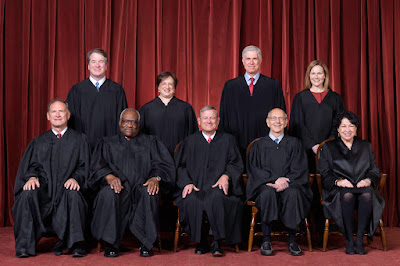 Chief Justice John Roberts says he doesn't want the "Roberts Court" to be remembered as a political institution. Too bad, John. That horse has left the barn.

Just as Congress has been corrupted, transformed into a bought and sold institution where votes often end up with the highest bidder; and, just as  the regulatory branch has been corrupted, delivered into the hands of the very industries being regulated; thanks to an incredibly corrupt president, aided and abetted, by a then Republican-controlled Congress, now it's the legislative branch that has been bent.

The US Supreme Court is a fiercely collegial club where the justices are loath to call each other out. At most there may be a line or two of subtle rebuke in some judgment but that's about it. Until, along comes a "stacked deck" bench seemingly geared up to cripple or perhaps even kill off Roe v. Wade, putting an end to federal protection of a woman's right to abortion.

Ruth Bader Ginsburg is no longer on the bench, her place taken by Amy Cony Barrett, the court's very own Stepford Wife. She holds hands with another Trump appointee, the Artful Dodger, Brett Kavanaugh. Together and in league with four others they make up the wantonly deceitful hard right majority that now navigates the court to the radical right fringes.

Politicians in Mississippi, Sotomayor remarked (while leaving it unsaid that they were rightwing Republicans), had devised new legislation to ban abortions after just 15 weeks of pregnancy. By these politicians’ own admission, their bills were targeted specifically at the three new justices on the supreme court (all appointed by Trump, though she left that unspoken too).

Then she went in for the kill.

She addressed the danger posed by the court’s sudden and apparently politically motivated change of heart not just to abortion rights but to the rule of law itself.

If the nation’s highest court, with its newly constituted Trumpian majority, were to go along with the ploy set for it by Mississippi and throw out half a century of settled law affirming a woman’s right to choose, then what would happen to the court’s legitimacy as a place in American democracy that rises above the cut and thrust of grubby partisanship?

“Will this institution survive the stench that this creates in the public perception that the constitution and its reading are just political acts?” she said. “I don’t see how it is possible.”
So, did the rightwing cabal rush to defend their honour and integrity? Not a chance. They knew there was no profit to be had by defending such a blatant abuse.
For Stephen Vladeck, a professor of constitutional law at the University of Texas at Austin, the takeaway of this week’s hearing was not how many justices were preoccupied with the reputational damage facing an increasingly politicised court, but how few. “To me, the single most distressing feature of Justice Sotomayor’s arguments was how little anyone else seemed to care,” he told the Guardian.

The three justices appointed by Trump have been especially keen to portray themselves as having not a partisan bone in their body. Neil Gorsuch, Trump’s first of the three appointments, insisted in September 2019 that it was “rubbish” to imply that the justices were “like politicians with robes”.

More recently Amy Coney Barrett, another of Trump’s triumvirate of appointees, told an audience in Kentucky that the supreme court was not “comprised of a bunch of partisan hacks”.
"No, we're not political hacks. I'm a judge, I know."
They're already gnawing away at the 14th Amendment (equal protection of the laws). How long before they swallow that and move to the 13th Amendment (abolition of slavery)?