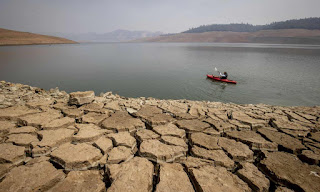 While southern British Columbia is arse-deep in floodwater, California is tapped out.

Water agencies in drought-stricken California that serve 27 million residents and 750,000 acres of farmland won’t get any of the water they have requested from the state heading into 2022 other than what’s needed for critical health and safety, state officials announced on Wednesday.

It’s the earliest date the department of water resources has issued a 0% water allocation, a milestone that reflects the dire conditions in California as drought continues to grip the nation’s most populous state and reservoirs have dropped to historically low levels.
Meanwhile a study out of MIT confirms that Atlantic hurricanes are becoming more frequent and more destructive. The 2021 hurricane season ended Wednesday, the sixth-consecutive above normal hurricane season.
While hurricanes may be America's most destructive weather events, heat waves are the most lethal. This has led California to introduce a heat wave ranking system.  Nearly two out of three Americans experienced heat waves this summer.
The concept is similar to the rating of hurricanes, but this ranking system would instead categorize heat waves on the basis of projected health outcomes rather than meteorology.

[Science adviser] Larry Kalkstein and his team are creating three heat-wave categories to use in major U.S. cities. category 1 would indicate a relatively low number of expected deaths, perhaps a zero to 10 percent increase in daily mortality. Category 3 would indicate a larger potential increase in the number of deaths — such as occurred in the Pacific Northwest heat wave in June.
Each category would be tied to specific actions that can help alleviate the effects of the extreme heat. For instance, a category 3 designation could trigger the opening of municipal swimming pools and air-conditioned shelters, and even door-to-door checks on the elderly and other vulnerable members of the community. Local utilities could be prevented from cutting off air conditioning or power for nonpayment during intense heat events. Other protections could include altering the schedules of outdoor workers.
And it's beginning to look not at all like Christmas in some western states and Canada where December heat records are already falling. 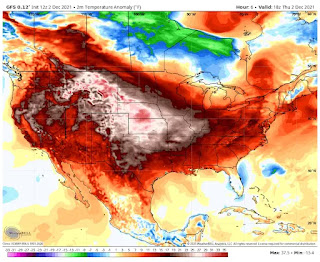 Wednesday brought the warmest December weather on record in Washington state, Montana, Wyoming, North Dakota and Canada as a sprawling heat dome spread across the western and central North America.

These state and national extremes were among scores of records established in the western half of the United States and southwest Canada. It was the first day of meteorological winter (Dec. 1) but felt like mid-fall or mid-spring.

In many areas, it will be even warmer Thursday afternoon. About one-third of the contiguous United States is expected to have highs of at least 70 degrees, which in some places is 30 to 35 degrees above average.
That's fine weather for digging pipelines - if it wasn't for all the flooding.