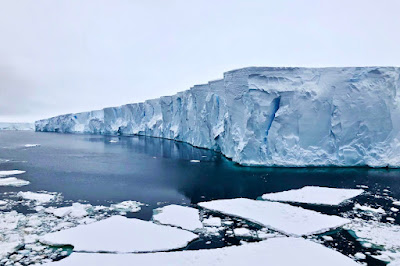 I never expected Rolling Stone magazine to close out 2021 with an "end is nigh" message but these are curious times.

The headline couldn't be more dramatic: "The Fuse is Blown, and the Doomsday Glacier is Coming For Us All."

A few weeks ago, scientists participating in the International Thwaites Glacier Collaboration, a $25 million five-year-long joint research program between the National Science Foundation in the U.S. and the Natural Environment Research Council in the U.K., presented their latest research. They described the discovery of cracks and fissures in the Thwaites eastern ice shelf, predicting that the ice shelf could fracture like a shattered car window in as little as five years.
It's not the ice shelf that poses the threat. It's the Thwaites glacier behind it that would eventually slide into the ocean, taking with it the rest of the West Antarctic glaciers resulting in sea level rise upwards of six to ten feet.
Given the ongoing war for American democracy and the deadly toll of the Covid pandemic, the loss of an ice shelf on a far-away continent populated by penguins might not seem to be big news. But in fact, the West Antarctic ice sheet is one of the most important tipping points in the Earth’s climate system. If Thwaites Glacier collapses, it opens the door for the rest of the West Antarctic ice sheet to slide into the sea. Globally, 250 million people live within three feet of high tide lines. Ten feet of sea level rise would be a world-bending catastrophe. It’s not only goodbye Miami, but goodbye to virtually every low-lying coastal city in the world.
The big question now isn't if but when. The rest of the Thwaites ice sheet could dislodge within just five years.  The IPCC predicts sea level rise of barely one foot to six feet by the entirely arbitrary date of 2100.  The West Antarctic glaciers could render the IPCC projections meaningless.
“The difference between those [models] is a lot of lives and money,” says Richard Alley, a glaciologist at Penn State University and one of the great ice scientists of our time. Alley adds: “The most likely place to generate [the worst scenario] is Thwaites.”

Or to put it more urgently: “If there is going to be a climate catastrophe,” Ohio State glaciologist Ian Howat once told me, “it’s probably going to start at Thwaites.”
Five years, three years, ten years, does it really matter?
The trouble with Thwaites, which is one of the largest glaciers on the planet, is that it’s also what scientists call “a threshold system.” That means instead of melting slowly like an ice cube on a summer day, it is more like a house of cards: It’s stable until it is pushed too far, then it collapses.
In the long run, it is not clear that the dynamics of ice sheet collapse that are underway at Thwaites can be stopped. As glaciologist Eric Rignot put it in 2015, in Antarctica, “the fuse has been blown.” Even if we cut carbon emissions to zero tomorrow, warm water will continue to flow beneath the ice sheet for decades, destabilizing the ice and further pushing the glacier toward eventual collapse. This doesn’t means that cutting carbon pollution to zero isn’t an important goal — nothing, in fact, is more important or more urgent. “We may have a small safety margin in Antarctica, but not a large one,” says Alley. Even if the fuse is blown, cutting emissions fast could slow it all down to a millennium-long crack-up that will give us more time to adapt. One way or another, our future is written in ice.
We don't know how it's going to happen. We don't know when it's going to happen or how fast. All we know is that it will happen. We know it could happen quickly or more slowly.  Many of you may see this unfold in your lifetime. I hope it doesn't happen in mine.