Karen - The Handmaiden of Decline 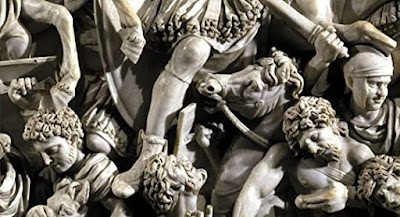 Readers of this blog will be familiar with my outsize focus on social cohesion and its role in societal collapse.

A friend recently posted a video of an irate American woman on a jetliner who struck and spat on a crew member, all of it captured by other passengers on their cellphones. There's even a term for it, "air rage," and videos of these events regularly appear on YouTube.

I have read about bizarre behaviours manifested when once dominant societies enter decline. Britain, for example, turned pretty weird as the kingdom slipped from its prominent perch.

Patrician (i.e. 'old school') Republican insider, Kevin Philips, compares and contrasts the decline of great states past with what is underway in his America.  His 2005 book, "American Theocracy", is a compelling read.

Is this what we're witnessing today albeit without understanding what is underway?  Is this a process explored by great thinkers of the near past such as Toynbee, Eisenstadt, Tainter, Kemp and others? Isa this an overture to the collapse described by Jared Diamond in his book of the same name?

Are we on the verge of a societal collapse? I cannot get into these schools of thought at any depth. Toynbee's treatment alone runs to 12 volumes. I have, however, found a helpful gloss posted by Wikipedia.

It's said that history doesn't repeat itself but it sure rhymes. True enough, especially on the subject of societal upheaval. There are two major differences between our world and the world pondered by the great thinkers.

The first distinction is that, while we are still a community of separate nations, distinct societies have gone the way of the do do bird.  The neoliberal order has given rise to a global society in the grip of a global economy that either dominates or merges with national societies.

In the past a dominant society, as it entered decline, was overtaken by another ascendant society. Those familiar with Thucydides Trap will know that two out of three transitions resulted in war. It might not be so clear cut this time around.

The second difference is that we have entered a new reality, a new geological epoch, the Anthropocene. For the first time in the history of human civilization we are confronted by truly existential challenges. Whether it's climate breakdown or overpopulation or over-consumption leading to resource exhaustion, we have no experience of these forces, especially not of this magnitude.

Whether it's Karen on an airplane, rampant inequality, social division and violence, these things may be the canary in the mine. We need to step back, take a hard look and try to grasp what is unfolding before our own eyes.