Is Boeing a Metaphor of our Times? 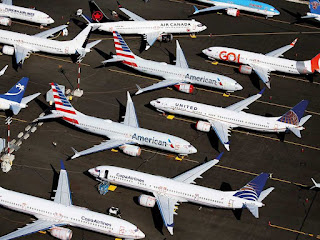 There was a time when Boeing set the bar for other manufacturers. It was an unusual company run by engineers whose focus was on one thing - building better airplanes. It's competitors, Douglas, Lockheed, deHavilland, Vickers, BAC, came and went. The Europeans set up Airbus but, even then, Boeing seemed unstoppable.

Then Boeing fell into the clutches of Wall Street. It began when Boeing swallowed the poison pill, a.k.a. McDonnell Douglas.

At the time, McDonnell Douglas was run by Harry Stonecipher, an unpleasant chief executive who relished cost cutting and had little patience for deliberative engineers. It was an attitude Stonecipher developed during his years at General Electric, where he worked with Jack Welch, the most influential C.E.O. of his generation and the pioneer of a new style of cutthroat capitalism that prioritized shareholder value above all else.

Stonecipher became chief executive of Boeing and promptly turned the company’s attention away from the business of producing exquisitely designed airplanes and toward the matter of generating profits for shareholders. Payrolls were slashed. Union labor was shunned. Technical work was outsourced to cheap contractors. The transformation only accelerated under Boeing’s next C.E.O., Jim McNerney, another G.E. veteran, who was a runner-up to replace Welch at G.E.
Peter Robison has chronicled Boeing's catastrophic decline in "The 737 Max and the Fall of Boeing."
Robison homes in on crucial moments during the eight years it took to design, certify and produce the 737 Max, revealing how at each turn, a fixation on profits led Boeing employees to make a series of catastrophic choices.

There was the decision to redesign the 737 instead of designing a new jet, obliging the company to update a plane that had been introduced in the 1960s. There was the introduction of a new piece of poorly designed software, MCAS, which ultimately wrested control of the plane away from the pilots. And there were the numerous instances when Boeing employees, including [chief test pilot] Forkner, played down the importance of MCAS to federal regulators and airlines, leaving pilots unaware of the new software until after the first crash. All the while, as Boeing executives skimped on the design and development of the Max, they shoveled billions of dollars back to shareholders in the form of buybacks and dividends.

There is a grim sense of inevitability as the crashes draw nearer. Among the most ominous warning signs Robison identifies are the Boeing employees who despaired about their own company. Many said they wouldn’t set foot on a Boeing plane. Others disparaged their colleagues, their customers and the regulators. During the design of the Max, one manager told an engineer: “People have to die before Boeing will change things.”

Aided and abetted by a complacent, too business-friendly, regulator - America's FAA.
After the first crash, Robison reveals how Boeing executives, including the company’s C.E.O. at the time, Dennis Muilenburg, blamed foreign pilots for the disaster, and how the company’s leaders proved incapable of grasping the magnitude of the crisis on their hands. He also charts how the F.A.A. lost its teeth as an effective regulator, leaving it complacent and unable to recognize that another plane could crash.
The damage done.
While Boeing has now accepted responsibility for one of the crashes as part of a settlement, no one at the company besides Forkner has been charged with a crime. Muilenburg was ousted as C.E.O., but still collected a $60 million golden parachute. After being grounded for more than a year, the 737 Max is back in service. And today, Boeing is led by Dave Calhoun, another Jack Welch protégé who was on the Boeing board for years, and was intimately involved in the company’s botched response to the crashes. Even with hundreds of families in pain, Boeing’s reputation tarnished and the F.A.A.’s credibility in tatters, “the managers,” Robison writes, “men who heaped on the pressure, reaped the rewards and then disappeared when the whole deadly blunder was exposed — never paid any price.”