Is America Just One Reichstag Fire Away? 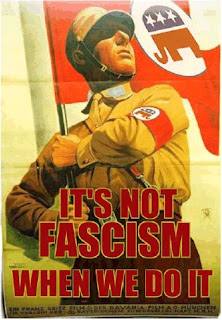 There's growing concern that Red State America, with the US Supreme Court acting in concert, may reverse Roe v. Wade and make it once again almost impossible for women to secure abortion.

I don't want to rehash the reproductive rights battle again. As far as I'm concerned this is a matter of women's rights and my personal views are not relevant.

What concerns me is how this issue reflects a growing, perhaps now irreversible, fracture in the American nation.

The US abandoned democracy years ago. That was orchestrated through the systematic "capture" of the offices of American government. It began with "legislative capture" in which Congress became bought and sold. This was convincingly demonstrated by a report out of Princeton in 2014 by professors Gilens (Princeton) and Page (Northwestern).  They went back several years to find issues where special interests and the public interest clashed and found that, almost invariably, the powerful private interests prevailed over the public interest, will of the public, vox populii, call it what you will. This led the authors to conclude that the United States had quietly transitioned from a democratic republic to an oligarchy.

Once the legislative branch was corrupted the next step was "regulatory capture." This was a matter of stacking the boards and councils of regulatory tribunals with representatives of the industries being regulated.

Donald Trump implemented "executive capture." It's now reported he made a tidy 1.5 billion dollars out of his four year stay in the White House.  The real damage, however, was Trump, in collaboration with a Republican Congress, stacking the US Supreme Court with reliable, Republican hardliners or "judicial capture."

Legislative capture, regulatory capture, executive capture and judicial capture have reduced to ash and ember America's once vaunted system of checks and balances. It cements the consolidation of power in the hands of the few over the many. It consummates the largest unearned transfer of wealth (and with it, political power) out of the blue and white collar classes into the bank accounts and offshore holdings of the new aristocracy.

As democracy was quietly euthanized, a new order was required for the plebs. It came in the form of tribalism. Before his death in 1996, Carl Sagan sensed this coming:

“I worry that, especially as the Millennium edges nearer, pseudoscience and superstition will seem year by year more tempting, the siren song of unreason more sonorous and attractive. Where have we heard it before? Whenever our ethnic or national prejudices are aroused, in times of scarcity, during challenges to national self-esteem or nerve, when we agonize about our diminished cosmic place and purpose, or when fanaticism is bubbling up around us - then, habits of thought familiar from ages past reach for the controls.

I have spent some time trying to glean what transpired in Germany in the 1920s and, especially, the 1930s, when a brief flirtation with democracy ended in the rise of authoritarian rule and, ultimately, catastrophe. The more I learned the more I saw trends that seem to be in play in a darkening America today, a stirring of demons.

Hitler seduced a good many ordinary, decent German volk by nurturing grievance and promising a return to Aryan (white) supremacy and Germany's natural order as imagined in the past of Frederick the Great, Wagner and the Teutonic Knights.  He promised to drive the Jew, the communists and other degenerates out of the homeland and restore purity to the land. He would reverse the shame of Versailles.

This is not being repeated in the US today but something faintly similar very much is.

As the National Socialists abhored democracy so too does the American Right.  The Germans used force to dissolve the Reichstag. The American Right has chosen to simply capture the offices of state. Several years back I read an analysis by an American political economist warning that the emerging oligarchs were no longer content to bribe government. They had decided to own it. They may be one "Reichstag Fire" away from strangling America's vestigial democracy.

The National Socialists exploited economic chaos, ethnic and religious bigotry and skilfully nurtured grievance. Theirs was a world of two species, "true Germans" and outsiders. They would be guided to glory by an ideology, Naziism.

What prevails in much of America today?  They certainly have economic chaos in the form of inequality, the gig economy and rise of the precariat. One might think they would take to the streets with pitchforks and torches marching on the oligarchs and their congressional minions but no, they have been made to believe that their torment is the handiwork of people of colour, foreigners and countries such as China that have somehow exploited America.

Lyndon Johnson tapped into this weakness when he said, "If you can convince the lowest white man he's better than the best colored man, he won't notice you're picking his pocket. Hell, give him somebody to look down on, and he'll empty his pockets for you." It was true then. It's every bit as true today. Only today we see Johnson's "lowest white man" and those who use them elected to Congress. The Republican leadership has come to fear these people within their own ranks.

The United States today is said to be more divided than at any time since the Civil War. It certainly is deeply divided but today division erupts across several fault lines, each weakening all the others. These divisions are amplified and inflamed by outright propaganda agencies such as FOX News, the One America News network, and chains of open-mouth radio networks. The villanous hate they spew is echoed from the pulpits of the most perverted variety of Christianity witnessed in centuries.

There are no Cronkites, no Huntley or Brinkley, no McNeil or Lehrer today. Just Tucker Carlson.

America is being tested to its breaking limits.  Democracy is on death watch, social cohesion is perhaps irreversibly eroded and ascendant forces seem poised to take the reins.