An American Fears for His Country 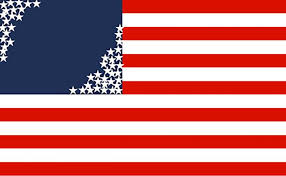 CNN analyst, Bill Carter, like many of his countrymen, sees his United States broken, perhaps irreparably.

Carter has seen America bruised and battered from the Kennedy assassination to the Viet Nam war, Watergate, the decades of school shootings, to the 9/11 attacks.

Nothing can diminish the staggering impact of these events, and their ripple effects through the consciousness of Americans.
But the moment we are at right now feels different, eerie almost, like the stillness that presages a coming storm of a magnitude we can't yet measure.
...Maybe only two events before my time, the Civil War and World War II, are legitimate rivals to our current crisis in terms of potential destructive impact. In both those earlier cases, our democracy also came under mortal threat, once from internal forces, once external. Both encompassed authoritarianism, violent threats to opponents, popular appeal based on rage and grievances, a cult following and very big lies. And, in both those past crises, our democracy still survived.
The triumph of division.
For the first time, a group trying to unravel democracy has its own media megaphone to blast out propagandistic disinformation about the 2020 election, falsely claiming that it was stolen, despite an utter lack of evidence.
Lies about the election have been thoroughly discredited already, in courts and endless "audits." But pro-Trump Republicans continue to believe the fabrications, and worse, use them to install biased election officials and to enact laws that pave the way for them to overturn vote totals they don't like — all accompanied by unceasing efforts to suppress or deny the vote to people who oppose them.
That utterly unjustified and nefarious activity is the fuel stoking the drive to see the American experiment in a government of the people, for the people and by the people perish from the earth.
This isn't a case of over-the-top partisan politics gone a bit too far, where one side pushes this way and the other side pushes back. It's a slowly unfolding horror movie; and yes, unless something changes the scary ending, it will certainly be the biggest news story of my lifetime.
This is a thoroughly engineered coup. It is an attack from within. It is powerful and very well funded. As for Canada, we'll probably end up as collateral damage.