Why Settle for Jesus When You Really Want Mars? 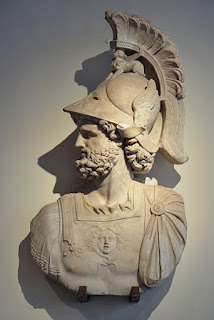 Mars, the Roman god of war. Is that what Americans are referring to when they proclaim "in God we trust?"

Ain't it odd that Americans call the Pentagon the "defense department" when it is so unconstituted for defense (or, as we call it, defence.)? Wouldn't it be better to go back to the old standby, the War Department?

Who is America’s god? The Christian god of the beatitudes, the one who healed the sick, helped the poor, and preached love of neighbor? Not in these (dis)United States. In the Pledge of Allegiance, we speak proudly of One Nation under God, but in the aggregate, this country doesn’t serve or worship Jesus Christ, or Allah, or any other god of justice and mercy. In truth, the deity America believes in is the five-sided one headquartered in Arlington, Virginia.

America’s true god is a deity of wrath, whose keenest followers profit mightily from war and see such gains as virtuous, while its most militant disciples, a crew of losing generals and failed Washington officials, routinely employ murderous violence across the globe. It contains multitudes, its name is legion, but if this deity must have one name, citing a need for some restraint, let it be known as the Pentagod.

I confess that I’m floored by this simple fact: for two decades in which “forever war” has served as an apt descriptor of America’s true state of the union, the Pentagod has failed to deliver on any of its promises. Iraq and Afghanistan? Just the most obvious of a series of war-on-terror quagmires and failures galore.

That ultimate deity can’t even pass a simple financial audit to account for what it does with those endless funds shoved its way, yet our representatives in Washington keep doing so by the trillions. Spectacular failure after spectacular failure and yet that all-American god just rolls on, seemingly unstoppable, unquenchable, rarely questioned, never penalized, always on top.

Prefabricated war is how the Pentagod has ruled for so endlessly long. There is, as a start, the fabrication of false causes for war. In Vietnam, it was the Gulf of Tonkin Incident, the “attacks” on U.S. Navy ships that never happened. In Afghanistan, it was vengeance for the 9/11 attacks against a people who neither planned nor committed them. In Iraq, it was the weapons of mass destruction that Saddam Hussein didn’t have. Real causes don’t matter much to America’s war god since false ones can always be fabricated, after which enough true believers — especially in Congress — will embrace them fervently and faithfully.

...here’s an article of faith rarely questioned by true believers: while America prides itself on having the world’s best and most powerful military, it perennially declares itself in danger of being overmatched. As a result, from aircraft carriers to stealth bombers to nuclear missiles, ever more weaponry must be fabricated. Who cares that it takes the next 11 nations combined to come close to matching the American “defense” budget. Beware the cry, “O ye of little faith!” should you dare to question any of the Pentagod’s fabricated “needs.”
Astore is plainly right but stops well short of venturing solutions. How is the PentaGod to be tamed, what awaits if it isn't? With endless tributes to "the troops" including jet fighter fly pasts to open every NASCAR event or championship football game can the American people ever be weaned off  this addiction to permawar?