What Are They Playing At? 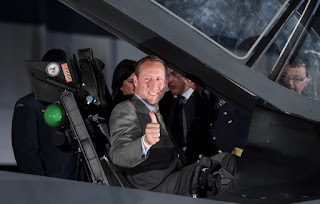 It's new fighter time for the RCAF. There were three contenders short-listed: the latest F-18, the SAAB Gripen and Lockheed's F-35.

The F-18 was rejected. Apparently it doesn't meet the RCAF requirements but how is unclear. In any case don't shed a tear for the manufacturer, Boeing, after that company did a dirty on Bombardier's promising C-series jetliners. Screw Boeing.

That, however, leaves us with two aircraft that supposedly do meet the RCAF requirements and it's an odd couple to be sure. It's hard to imagine how two aircraft so different could both fit the bill. There's probably a logical answer to that - they don't.

The costly and often unreliable F-35 is the favourite of the RCAF brass. It's American after all and Canada's generals put a premium on all things American. I wonder if they've noticed how many wars our bellicose neighbours to the south have won with all their high-tech wizardry?

Despite 20 years of development, the F-35 is - and will remain - prototypical. It was the first go at embodying some of the stealth features of the F-22 Raptor into a glorified bomb truck. America's military has a love/hate relationship with the F-35 due to its spotty reliability, high cost and sometimes inadequate performance. Here's an example. The original requirements for the F-35 specified a maximum landing distance. The F-35 couldn't meet the requirement. The Air Force simply adjusted the figure to what the F-35 could do. There have been a few of these "workarounds."

The US Navy has a few problems with it. For the F-35 C, the naval version, to bomb China (it's real purpose) the carrier has to bring the fighters within range of the shore. That brings the aircraft carriers within range of ballistic missiles China has developed specifically to sink those carriers. It's called A2/AD or anti-access/area denial.  Think of it as Beijing's NORAD only when they do it they're a bunch of sneaky little buggers.

The F-35 is up against SAAB's Gripen a name that, in English, comes out to Griffin, something confirmed by the early tail art chosen by SAAB. The Gripen has a few advantages over the F-35. It's smallish, it's reliable, it is far less costly to operate. It's not a stealth strike bomber but it has an electronic suite that offsets that shortcoming to some extent. Did I mention it's Swedish? To the RCAF boys that sounds suspicious, Surströmming or sour herring, okay for Swedes but not real men.

I don't want to tip the scales but, then again, when was the last war the Swedes lost? Actually they won it. It was 1814. The Danes got their asses handed to them and Sweden took over Norway. I'll bet you didn't know that when you got out of bed this morning. 1814, that was the last time American forces tried to conquer Canada. Unlike the Swedes, they were sent packing, eh?  Don't want to rub it in but hey.

Does Canada really need the ability to bomb China? You can't get there from here and, besides...  There's also the cost factor. Ottawa has been draining the treasury to get us through the pandemic and now we have climate change to contend with. These are costly problems. This might not be the best time to throw billions of dollars on high-ticket capabilities we don't need. America has shopped the F-35 to several countries, Britain and Australia for example. They've got a pretty good aerial foreign legion if they want to attack China. They don't need us toting their bombs.

So, my money is on the capable, reliable and less costly Swedish bird of prey. It just seems to make more sense.