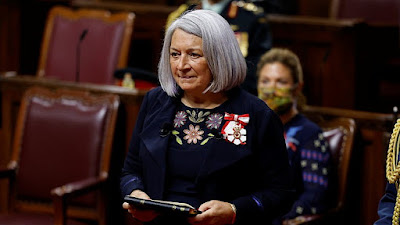 The Trudeau government will end the pandemic, fight climate change and rebuild the economy. It's right there in today's Throne Speech. And if this prime minister is known for anything, it's keeping his word.  A solemn promise given is a solemn promise. It literally oozes solemnity. It even has that yeasty smell of a freshly baked baguette.

The Liberal government is promising to bring the pandemic to an end while building the economy, fighting climate change, rolling out new child care deals with the provinces and pursuing reconciliation with Indigenous Peoples.

Gov. Gen. Mary May Simon, Canada's first Indigenous head of state, unveiled those priorities today in a speech from the throne that pointed to progress in the relationship between the federal government and Indigenous peoples.

"Priority number one remains getting the pandemic under control. The best way to do that is vaccination."

Simon said the Liberal government is committing to supporting and promoting the French language, both in and outside of Quebec, by reintroducing the proposed Act for the Substantive Equality of French and English.

"The government will also strengthen action to prevent and prepare for floods, wildfires, droughts, coastline erosion and other extreme weather worsened by climate change," Simon said.
Well that's spiffy. We're going to "strengthen action" to prevent and prepare for climate breakdown. That sounds lovely. I wonder how much strengthened action they're willing to fund?
I have to say, so far I really do like this GG.