Next Week - "A Parade of Storms" 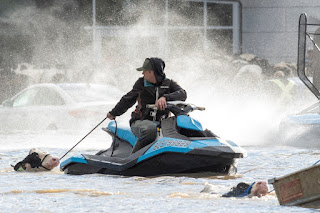 On the heels of last week's storm disaster, much of British Columbia is now facing a second atmospheric river. The storm has come ashore at Haida Gwaii and is expected to veer south, perhaps reaching the already flooded Fraser Valley by Thursday.
Things don't look better for next week either. Environment Canada warns that the Lower Mainland can expect a "parade of storms" next week.
“The forecast going forward for the south coast (of B.C.) is very wet. That’s the short and the long of it,” said Environment and Climate Change Canada’s warning preparedness meteorologist Armel Castellan during a technical briefing with media on Monday.

“We’ve had obviously a very wet fall and we are going to continue with a parade of storms.”

Of most concern currently for Environment Canada is a warm “atmospheric river” (also known as a “tropical punch” or a “pineapple express”) that will bring in both rain and higher temperatures, meaning that water from snow melt in the mountains will add to the flooding in nearby valleys.

This will be particularly felt in the Fraser Valley as well as the north shore mountains, Castellan said.