Here's the Problem. What Do You Do With an Uninsurable House? 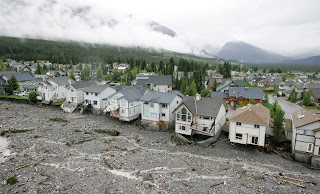 For most plebs their house is their home and their most valuable asset. It's their retirement nest egg. It's where they sink most of their disposable cash on improvements, redecorating, etc.

So, what happens when they discover that their house has become uninsurable? I guess "nothing good" isn't an adequate answer even if it is accurate.

Most home buyers depend on mortgage financing to fund the purchase price.  Mortgage lenders come in several varieties but they have something in common - they want proof of insurance. They want to know that their loan is safe.

One of the insurers I follow is Munich Re. They're actually a re-insurer. Insurance companies use re-insurers to offload some of their risk. Who knows, maybe they've got a piece of your action.

In 2018, Munich Re dropped a bombshell. Climate change could push insurance premiums beyond the reach of some homeowners.

“If the risk from wildfires, flooding, storms or hail is increasing then the only sustainable option we have is to adjust our risk prices accordingly. In the long run it might become a social issue,” he said after Munich Re published a report into climate change’s impact on wildfires. “Affordability is so critical [because] some people on low and average incomes in some regions will no longer be able to buy insurance.”
Nicolas Jeanmart, the head of personal insurance, general insurance and macroeconomics at Insurance Europe, which speaks for 34 national insurance associations, said the knock-on effects from rising premiums could pose a threat to social order.

If insurance premiums soar that cuts into the amount of money a purchaser can afford to pay for your house. If insurance becomes unavailable, the amount of money your house is worth can become negligible. Either way, it's a "social issue" to be sure.
Curiously enough, in 2020, Munich Re took a hike on the Athabasca Tar Sands.
“Munich Re has a policy on oils sands in place, covering both investments and insurance. We no longer insure the extraction of oil sands or related dedicated infrastructure on a single risk basis. And we do not invest in companies that generate >10% of their revenue from oil sands extraction.”
This is not particularly new. In February, the world's biggest investment house, BlackRock, announced it was ditching all things Tar Sandy.

“If you look at how destructive oil sands can be, there’s a very strong rationale,” Armando Senra, head of BlackRock’s iShares Americas funds, said in an interview, saying that Alberta’s oil fields, along with coal, are “the worst offenders, if you want, from a climate perspective.”

It wasn’t just financing that suddenly seemed at risk. Some of the world’s largest insurance companies, including AXA, Swiss RE and Zurich Insurance, announced they would stop providing coverage to projects in the oil sands, which are sometimes referred to as tar sands, as well as no longer investing money in those projects.
Jeez Louise, and Justin hasn't even got that damned pipeline finished yet.
It's much the same problem for wildfire risks. In 2019 California had to impose a one year moratorium to prevent insurers from cancelling fire insurance coverage.

The new policy imposes a one-year moratorium, preventing insurers from dropping customers in or alongside ZIP codes struck by recent wildfires. The moratorium covers at least 800,000 homes around the state. The state has also asked insurers to voluntarily stop dropping customers anywhere in California because of fire risk for one year.
“People are losing insurance even after decades with the same company and no history of filing claims,” Ricardo Lara, California’s insurance commissioner, said in a statement. “Hitting the pause button on issuing non-renewals due to wildfire risk will help California’s insurance market stabilize and give us time to work together on lasting solutions.”
In a survey of 27 state insurance regulators this year, the consulting firm Deloitte found that just four states said their insurers were “fully” or “largely” prepared to respond to the risks of climate change. The danger of insurers being overwhelmed by worsening natural disasters “is very real,” Deloitte wrote in its report.
...After two years of extreme losses, it is clear that California’s insurers are struggling to prepare themselves for a new era of accelerating climate risk, according to interviews with insurance executives, academics and regulators. New research shows that the wildfires of 2017 and 2018 alone wiped out a full quarter-century of the industry’s profits. Last year’s Camp Fire was the costliest disaster anywhere in the world that year, according to the insurer Munich Re.