About that "Coast to Coast" Thing 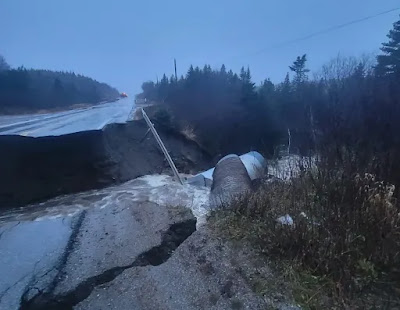 This time last week the Trans-Canada highway was washed out in British Columbia.  Every mountain route was washed out, along with both railways.

Now it's the east coast's turn. The Trans-Canada is down in Newfoundland and Labrador and there's plenty more rain on the way.

The Department of Transportation is reporting multiple washed out roads in the Codroy Valley area, including two parts of the Trans-Canada Highway near Doyles, after a rainstorm pummelled Newfoundland's southwest coast overnight.
Rodney Barney, a meteorologist with Environment Canada's weather officer in Gander, said the rain should intensify early Wednesday morning, as meteorologists expect the system to bring 150 to 200 millimetres of rain to the area in total.

"It looks like through the morning hours is probably when the heaviest part of the shower activity will be occurring for today, then gradually winding down as we go into the afternoon and evening."

Barney said another 50 to 80 millimetres of rain could fall, with as much as 150 millimetres over high-elevation areas.
Cape Breton was also hard hit.
It could be "days or weeks" before things get back to normal in flood-ravaged parts of Cape Breton following the rain and wind storm that swept across Nova Scotia, according to a provincial transportation official.

Jamie Chisholm, the Department of Transportation's eastern district director, said "We've had multiple bridges compromised, some washed out completely, several roads that are impassable right now."
This is becoming a familiar refrain, ain't it?