There's a new term for it, "Vapor Storms." 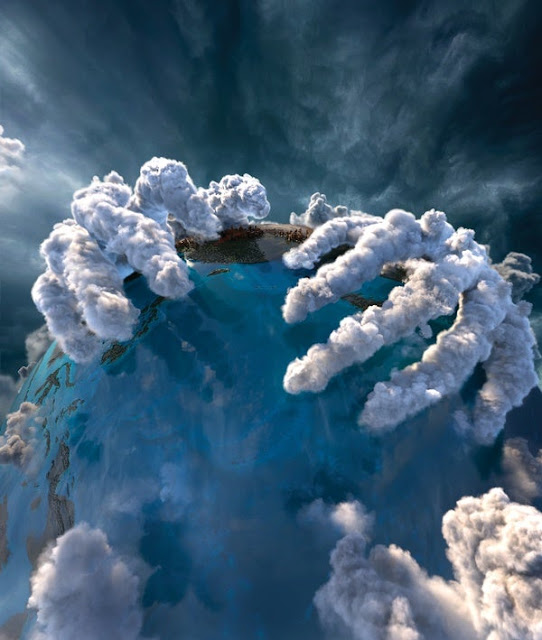 Scientific American has a new term for it, "vapor storms."The summer of 2021 was a glaring example of what disruptive weather will look like in a warming world. In mid-July, storms in western Germany and Belgium dropped up to eight inches of rain in two days. Floodwaters ripped buildings apart and propelled them through village streets. A week later a year’s worth of rain—more than two feet—fell in China’s Henan province in just three days. Hundreds of thousands of people fled rivers that had burst their banks. In the capital city of Zhengzhou, commuters posted videos showing passengers trapped inside flooding subway cars, straining their heads toward the ceiling to reach the last pocket of air above the quickly rising water. In mid-August a sharp kink in the jet stream brought torrential storms to Tennessee that dropped an incredible 17 inches of rain in just 24 hours; catastrophic flooding killed at least 20 people. None of these storm systems were hurricanes or tropical depressions.

What all these destructive events have in common is water vapor—lots of it. Water vapor—the gaseous form of H2O—is playing an outsized role in fueling destructive storms and accelerating climate change. As the oceans and atmosphere warm, additional water evaporates into the air. Warmer air, in turn, can hold more of that vapor before it condenses into cloud droplets that can create flooding rains. The amount of vapor in the atmosphere has increased about 4 percent globally just since the mid-1990s. That may not sound like much, but it is a big deal to the climate system. A juicier atmosphere provides extra energy and moisture for storms of all kinds, including summertime thunderstorms, nor’easters along the U.S. Eastern Seaboard, hurricanes and even snowstorms. Additional vapor helps tropical storms like Ida intensify faster, too, leaving precious little time for safety officials to warn people in the crosshairs.
This isn't some dire threat we face if we don't get it together at the climate summit in Glasgow, COP 26 or 27, 28, 30 or 40. This is our new normal, for now anyway. With each warmer year (and we've witnessed a succession of them over the last two decades) the atmosphere is warming and, as it does, becoming "juicier."
In August 2017 Hurricane Harvey dumped a mind-boggling five feet of rain in some Houston neighborhoods over the five days it dawdled in the region, leaving even well-weathered meteorologists speechless. At times the rainbands dropped an astounding six inches of precipitation per hour. One analysis concluded that the record-smashing rainfall was made three times more likely and 15 percent more intense by climate change, in particular the moisture-laden air that fed Harvey from the abnormally warm Gulf of Mexico.

...The threat from increased water vapor extends beyond storms. It is also making summer nights intolerably steamy—more often and in more places.

Since the mid-1990s summer nighttime minimum temperatures over global land areas have been rising faster than daytime highs. That is because vapor is a greenhouse gas, and more of it means more warming: heat that would normally escape to space at night is instead trapped, preventing Earth’s surface from cooling. And unlike carbon dioxide, which spreads worldwide regardless of where it is emitted, vapor tends to stay local.
The inability to cool off at night magnifies the effects of sweltering daytime temperatures.
More vapor also makes hot nights perilous. Higher nighttime humidity prevents your sweat from evaporating—the body’s natural cooling system—leaving you to overheat and interfering with sleep. One measure of this discomfort is the heat index, which combines the effects of temperature and humidity to represent the stress one’s body really feels. An index above about 100 degrees Fahrenheit (38 degrees Celsius) is considered dangerous; prolonged exposure can be fatal, especially to the elderly and infants. Heat stresses livestock and pets, too, and animals in the wild are adapting by moving toward higher latitudes or higher elevation if they can. Without a period of nighttime cooling, heat can also build up in soils, killing some plants and insects while allowing other, warmth-loving species to flourish.
Hiding in plain sight - the most dangerous greenhouse gas and worst climate feedback loop of them all.
If intense storms and sweltering nights are not troubling enough, water vapor is also making global warming worse. Even though carbon dioxide gets most of the attention, water vapor is by far the most important greenhouse gas in the atmosphere. It absorbs much more of the infrared energy radiated upward by Earth’s surface than do other greenhouse gases, thereby trapping more heat. To put this into perspective, a doubling of atmospheric carbon dioxide concentrations by itself would warm the globe approximately one degree C. But feedback loops—vicious cycles—make the temperature rise twice as much. Again, although feedbacks such as disappearing sea ice get a lot of attention, the water-vapor feedback loop—warming causes evaporation, which traps heat, creating even more warming—is the strongest one in the climate system.
The bottom line.
As human activities continue to produce more heat-trapping gases, the oceans and atmosphere will continue to warm, and additional water will evaporate, leading to more frequent vapor storms and debilitating steam waves. Hurricanes in the strongest categories will occur more often, as will storms that intensify rapidly.