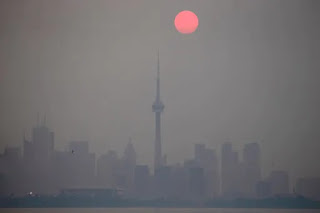 By now we're all familiar with the massive wildfires that have become a recurring disaster along the Pacific from Mexico to Alaska.  This summer we saw the town of Lytton, B.C., literally erased in a day.

Devastating as these fires are, the real killer is the smoke they spread across the breadth of North America. Westerly winds carry most of the smoke eastward sometimes as far as the Atlantic coast.

On July 20, a curious haze blanketed the sky across the eastern half of the United States. Sunsets appeared redder than normal, the atmosphere looked gray and dense and air quality plummeted. People from Washington to Philadelphia to New York snapped pictures of the abnormal hues — only to learn that the cause originated from wildfires nearly 3,000 miles away.

As large fires smolder in the western U.S., the smoke can travel across the country, blanketing large population centers. Now, a recent study shows that smoke, from both western wildfires and local sources, may be more harmful to residents in the eastern U.S. than many think.
Fires emit a mix of pollutants that negatively affect people’s health when inhaled. The researchers looked at the effects of a pollutant called PM2.5, or particulate matter with diameters smaller than 2.5 microns. These tiny particles can enter lungs and exacerbate or lead to numerous health problems, from respiratory illnesses to heart disease.
In Canada, the path of wildfire smoke can be tracked at www.firesmoke.ca.  While the interior regions of British Columbia and much of Alberta and Saskatchewan dealt with a massive smoke problem this summer, strong winds off the Pacific spared Vancouver Island.
Studies show that long-term exposure increases mortality rates but more research is needed. Once absorbed in the lungs, Pm 2.5 passes into the cirulatory system and then embeds in organs including the heart. There is no process that eliminates the particulate from the body.