The Road to Glasgow - 10 Days and Counting 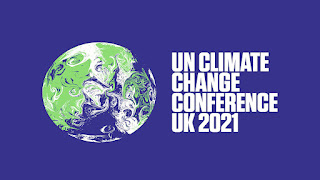 COP26 opens in Glasgow on October 31.

The real story, however, may lie in what happens over the next ten days. That's when we'll see how the big players align on the idea of dramatically slashing greenhouse gas emissions on an incredibly narrow timetable.

Guardian enviro-scribe, George Monbiot, cites the example of America on entering WWII as an example of what can be done.

Fatalism creeps across our movements like rust. In conversations with scientists and activists, I hear the same words, over and again: “We’re screwed.” Government plans are too little, too late. They are unlikely to prevent the Earth’s systems from flipping into new states hostile to humans and many other species.

What we need, to stand a high chance of stabilising our life support systems, is not slow and incremental change but sudden and drastic action. And this is widely considered impossible. There’s no money; governments are powerless; people won’t tolerate anything more ambitious than the tepid measures they have proposed. Or so we are told. It’s a stark illustration of a general rule: political failure is, at heart, a failure of imagination.
Monbiot sees a template in FDR's mobilization of the American economy in the wake of the Pearl Harbor attacks of 7 December, 1941.
Between 1940 and 1945, total government spending rose roughly tenfold. Astonishingly the US government spent more money (in current dollar terms) between 1942 and 1945 than it had between 1789 and 1941. From 1940 to 1944, its military budget rose by a factor of 42, outstripping Germany’s, Japan’s and the United Kingdom’s put together.

...General Motors began turning out tanks, aircraft engines, fighter planes, cannons and machine guns. Oldsmobile started making artillery shells; Pontiac produced anti-aircraft guns. By 1944, Ford was completing a long-range bomber plane almost every hour. During its three years of war, the US manufactured 87,000 naval vessels, including 27 aircraft carriers, 300,000 planes, 100,000 tanks and armoured cars and 44bn rounds of ammunition. Roosevelt described it as a “miracle of production”. But it wasn’t a miracle. It was the realisation of a well-laid plan.

The US war effort mobilised tens of millions of people. Between 1940 and the end of the war, the number of American troops rose 26-fold, while the civilian labour force increased by 10 million. Many of the new workers were women.

...So what stops the world from responding with the same decisive force to the greatest crisis humanity has ever faced? It’s not a lack of money or capacity or technology. If anything, digitisation would make such a transformation quicker and easier. It’s a problem that Roosevelt faced until Pearl Harbor: a lack of political will. Now, just as then, public hostility and indifference, encouraged by legacy industries (today, above all, fossil fuel, transport, infrastructure, meat and media), outweighs the demand for intervention.

The difference between 1941 and 2021 is that now the mobilisation needs to come first. We need to build popular movements so big that governments have no choice but to respond to them, if they wish to remain in office. We need to make politicians understand that the survival of life on Earth is more important than their ideological commitment to limited government. Preventing Earth’s systems from flipping means flipping our political systems.
I wish I could share Monbiot's optimism. I can't. The current challenge isn't to rally one nation shocked and energized by a sneak attack by another country. Even at the outset of WWII, the US declared war only on Japan. Hitler, stupidly, declared war on the United States. That coalesced the war into a struggle between the Axis Powers and the Allies.
Monbiot argues that we've already had our Pearl Harbor event.
After all, to extend the analogy, the Pacific seaboard of the US has recently come under unprecedented climatic attack. The heat domes, the droughts and fires there this year should have been enough to shock everyone out of their isolationism. But the gap between these events and people’s understanding of the forces that caused them is, arguably, the greatest public information failure in human history. We need bodies equivalent to Roosevelt’s Office of War Information, constantly reminding people of what is at stake.
For most of us, "the heat domes, the droughts and fires" are already just memories of an unpleasant summer. There was no call to arms from Ottawa or Washington. Hell's bells, we've got pipelines to build.
Unlike the United States on the morning of December 8, 1941, there's no consensus today that translates into 50 by '30, Net Zero by '50.  This climate emergency is global but it's not uniform. It affects each country, each region differently. It pits the interests of rich countries against poor countries. It pits the latitudinally advantaged countries against the equatorial and tropical countries. It pits the big emitters and their affluence against the small emitters and their poverty. Has anyone seen any signs that the rich countries will shoulder the burden of the poor? Any sign that we're willing to open the Pandora's Box of issues of fairness and equity?  Remember, this is a world in which money and power talks.
There have been calls for Biden and Xi to hammer out some bilateral deal, the sort of thing they could bring to Glasgow that might get the other nations to sign on to binding measures. Unfortunately Chairman  Xi has already announced he'll skip COP 26 and is relying on more coal power to get China through the winter. Then there's India's Narindra Modi who is spending the day in meetings with oil and gas executives.  Putin, purveyor of natural gas to the EU, won't be attending but may put in a virtual appearance.