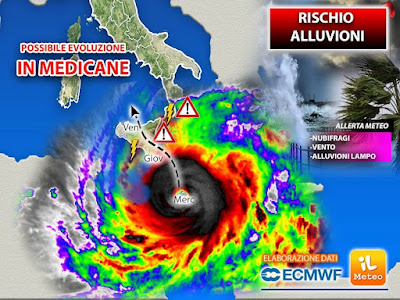 The climate crisis has brought us a number of "firsts" and it's just getting started.

We've seen wildfires that create their own weather. How about "firenadoes." Tornadoes of fire. We've always had flash floods in some places but now they're creating tsunamis in Tennessee and Kentucky or ripping up the main streets in medieval towns in Germany. We've also got something we call "flash droughts" which is a combination of  drought compounded by heatwaves, enough to kill off crops in the fields. We've got these poorly understood oceanic hot spots we call "blobs" that wreak havoc on fish stocks. Heat Domes, how about those? We got one here this summer. In a word - brutal. Then there's Wet Bulb 35, a combination of high heat and high humidity that will kill a healthy young person at rest in the shade in about two hours. You cook from the inside out. Nasty.

What's next? How about this - hurricanes in the Mediterranean. Time for a catchy name. They're calling this a "Medicane." Don't ask me to explain.

Forecasters have said the Medicane is the latest evidence demonstrating how the climate emergency is irremediably tropicalising the Mediterranean.

“Sicily is tropicalising and the upcoming Medicane is perhaps the first of this entity, but it certainly won’t be the last,” said Christian Mulder, a professor of ecology and climate emergency at the University of Catania. “We are used to thinking that this type of hurricane and cyclone begins in the oceans and not in a closed basin like the Mediterranean. But this is not the case.

“This Medicane is forming due to the torrid climate of north Africa and the warm waters of the Mediterranean Sea. The Aegean Sea has a temperature of 3C higher than the average, while the Ionian Sea has a temperature of almost 2C higher than the average. The result is a pressure cooker.”
It's no passing fancy either.
“The unique aspect is its duration and its stationing – that is, this atmospheric event is hard to dissolve. … on the one hand it continues to be fed by the cool western currents; on the other hand it is unable to move eastward, due to the Balkans’ anticyclone.”

The signs of change are becoming more frequent in Sicily, where in August a monitoring station in the south-eastern city of Syracuse recorded a temperature of 48.8C, the highest ever set in Europe. Data collected by the Balkans and Caucasus observatory put the average temperature rise on the island over the past 50 years at almost 2C, rising to 3.4C in Messina on the north-east coast.
But, hey, every Medicane has a silver lining. Up in Scandinavia some developers are planning to build resorts on the Baltic, imagining it will become the "new Mediterranean."  See, there's always an answer.