It's "Adapt or Die." What we'll pay for ignoring climate adaptation. 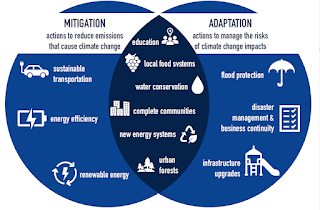 I wonder if, in decades to come, we'll see the Covid pandemic as a crisis that kept us from responding to the climate emergency.  It's clear now that, when it comes to disasters, we're shit at multi-tasking. One at a time if you don't mind.

Ahead of the UN Cop26 climate talks in Glasgow, the government agency is warning that adaptation – becoming resilient to the already inevitable effects of climate change – is just as important as actions to cut greenhouse gases.

It is a case of “adapt or die”, said the Environment Agency’s chair, Emma Howard Boyd, warning that deadly events such as the flooding in Germany this summer would hit the UK if the country did not make itself resilient to the more violent weather the climate emergency was bringing.
There will be more and worse environmental incidents, such as flooding, water shortages and pollution; regulation is not ready for climate change; and the natural world cannot adapt as fast as the climate is changing, the EA said.

The report notes that population growth and climate change will increase water demands and mean that, if no further action is taken between 2025 and 2050, more than 3.4bn extra litres of water a day will be needed for resilient public water supplies.

Hotter drier summers, rising sea levels and pressures from development are adding to water supply issues for people, industry, agriculture, recreational river use and wildlife. With 2C of global warming – below the level of warming for which the world is currently on track – England’s winter rainfall will increase by about 6%, but summer rainfall will be down 15% by the 2050s.
Howard Boyd said: “The climate crisis is global, but its impacts are in your village, your shop, your home.

“Adaptation action needs to be integral to government, businesses and communities too and people will soon question why it isn’t – especially when it is much cheaper to invest early in climate resilience than to live with the costs of inaction.”

She added: “While mitigation might save the planet, it is adaptation, preparing for climate shocks, that will save millions of lives.
Canada isn't immune either.  We'll argue endlessly about mitigation, cutting emissions, feds versus the provinces, we strenuously avoid the question of adaptation and our nation's vulnerability to climate impacts.
Flashback to 2013 when Calgary's Saddle Dome was awash in flood waters. While that was going on the World Conference on Disaster Management convened in Toronto.
Dr. Saeed Mirza, emeritus professor at Montreal’s McGill University specializing in structural engineering, warned that the monumental infrastructure costs accumulated over decades of negligence have left Canada particularly vulnerable to catastrophic events.

“The frequency and intensity of these events has been increasing at an escalating rate and what was a one-in-100-year event at one time may become the norm,” he said.

Mirza estimated that Canada’s infrastructure requirements have reached a cost of about $1 trillion, while a recent survey by the McKinsey Global Institute earlier this year stated that worldwide infrastructure needs are about $57 trillion.
“How prepared are we? One way of answering that is that we will never be as prepared as we could be,” said Adrian Gordon, former President & CEO of the Canadian Centre for Emergency Preparedness.

“In terms of funding, the amounts of money are truly frightening and there’s no government in the world that can find the kind of money necessary to bring existing infrastructure up to par,” Gordon said.
Of course Mirza and Gordon could not have foreseen the global pandemic that arrived in 2020. I hope to have their responses soon.