He Was Right Then. He's Right Today. 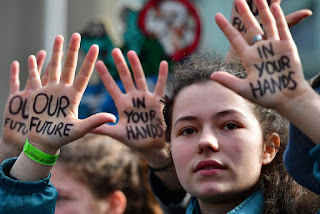 Paris, 2015. The leaders of the community of nations agreed that we had to unite to avert climate catastrophe and that meant keeping global warming to no more than 1.5 degrees Celsius. It was a moment of celebration and hope.

Among the delegates was an odd-looking German, the then head of the Potsdam Institute, Hans Joachim Schellnhuber.  A reporter asked him if we could really do it. Could we keep warming within the 1.5 C target?  He said we could indeed but it would require the "induced implosion" of the fossil energy industry.

What Schellnhuber was saying was that the political caste were not just going to have to bite the hand that feeds them. They were going to have to amputate it. Blow it up. Put it down. That was the key to a transition to clean energy. The fossil fuelers were not going away on their own.

Earlier this week the BBC reported on a tranche of leaked documents that showed that countries such as Saudi Arabia, Japan and Australia were lobbying hard to slow the shift from fossil fuels. These same countries and corporations are expected to pursue delaying options at the Glasgow climate summit.

The Paris summit was six years ago. Since then, despite the Covid pandemic, fossil fuel emissions have increased. There are still many hold outs - Russia, Saudi Arabia, Brazil, US Republicans (with some Democrats to boot), Australia, China, India, Poland and Hungary. Even Canada's record is not unblemished.

The clock is running out and just when we need a near universal consensus to do whatever it takes to avert climate catastrophe, the stars are not aligning in our favour. The holdouts are still holding out.

Earlier this week the US National Intelligence Council released a report on climate change and international responses that threaten US national security through 2040.  Let's just say it was not uplifting.  It suggested some sort of climate Cold War could develop pitting the US against China. Many nations could be critically destabilized.  Fossil fuels, it warned, are here to stay. There's too much invested in them for any induced implosion of the type mentioned by Schellnhuber.

The cooperative breakthrough of the Paris Agreement may be short lived as countries struggle to reduce their emissions and blame others for not doing enough.

Financial needs will grow as the physical effects intensify; the UN estimates that developing countries will need upwards of $300 billion in annual investment by 2030 just to adapt.
The report sees conflicts among smaller countries over water access and migration and major power rivalries that could boil over, especially in the Arctic.
The image they're painting is one of instability and chaos, hardly the attributes required for a global committment to act on a global threat.
Is it possible there'll be some great breakthrough, some global epiphany that emerges from the Glasgow climate summit? Sure. Is it likely? Look at it this way. Glasgow is COP 26, the 26th annual UN climate summit. That's how long we've been kicking this problem down the road.  Now the miraculous consensus reached in Paris in 2015 seems increasingly wobbly.
One idea that's simply off the table is the notion of some induced implosion of the fossil fuel industry. Big Oil, Big Coal and Big Gas, they're not done with us yet and neither are their political minions.