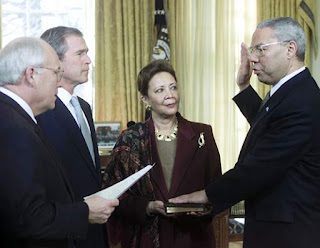 A son of immigrants who rose to become the first black general to chair America's Joint Chiefs of Staff, Colin Powell has died of complications of Covid-19.

Not surprisingly, Powell had been fully vaccinated. A reminder that the vaccines may keep you safer but there is no entirely safe.

Powell had a storied career with plenty of ups and downs. Years ago there were rumours that he played some role in the US Army's efforts to conceal the My Lai massacre, a cog in the military machine.

He surfaced again in the public eye when he as appointed Chairman of the Joint Chiefs of Staff. Powell ran the shop when coalition forces drove Saddam's troops out of Kuwait.

As Secretary of State under George w. Bush, he gave America a dandy bit of advice called the "Powell Doctrine"

The Powell Doctrine states that a list of questions all have to be answered affirmatively before military action is taken by the United States:

Do we have a clear attainable objective?

Have the risks and costs been fully and frankly analyzed?

Have all other non-violent policy means been fully exhausted?

Is there a plausible exit strategy to avoid endless entanglement?

Have the consequences of our action been fully considered?

Is the action supported by the American people?

Do we have genuine broad international support?

As Powell said in an April 1, 2009 interview on The Rachel Maddow Show, it denotes a nation's exhausting of all "political, economic, and diplomatic means", which, only if all were futile, would result in the condition that the nation should resort to military force. Powell has also asserted that when a nation is engaging in war, every resource and tool should be used to achieve decisive force against the enemy, minimizing casualties and ending the conflict quickly by forcing the weaker force to capitulate.
Powell warned Bush/Cheney against the invasion of Iraq citing the "Pottery Barn rule" of "you broke it, you own it." He later said he regretted appearing before the UN General Assembly to present ginned-up evidence of Iraqi weapons of mass destruction. 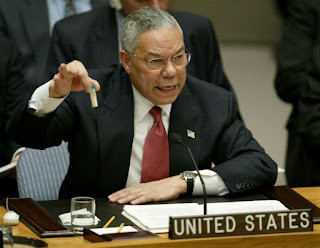 A lifelong Republican, Powell broke with the GOP during the Trump presidency. He never went back.