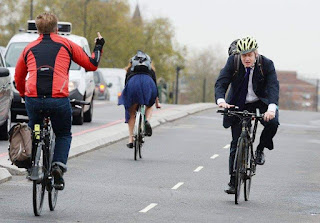 For a guy notorious for over-selling and under-delivering on everything from Brexit to the pandemic, Brit p.m., Boris Johnson, is hedging his bets on the upcoming Glasgow climate summit, COP 26.

The prime minister appeared to lower expectations about whether the global summit of leaders that begins this week would be a success, after the Russian president, Vladimir Putin, confirmed for the first time that he would not attend “in the light of the coronavirus situation”, according to Downing Street.

The move was expected by some UK government insiders, but it will still come as a blow to those who hoped the world leaders whose influence would be key to reducing emissions across the planet would gather around the negotiating table.
...He was also cautious about whether many breakthroughs will come when world leaders gather touch down in Scotland later this week. “I think it can be done,” Johnson said. “It’s going to be very, very tough, this summit, and I’m very worried because it might go wrong. We might not get the agreements that we need. It’s touch and go, it’s very, very difficult … It’s very far from clear that we’ll get the progress that we need.”
China's Xi won't be at the table. Putin is giving Glasgow a pass. India's Narendra Modi is planning to attend. India is the third biggest emitter of greenhouse gases, behind China and the US.