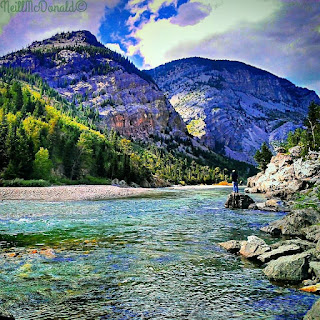 Alberta, or at least the southern part of the province, is looking at a future of water insecurity. Climate change and the retreat of glaciers are the main culprits.

Canada's Prairie provinces could be particularly hard hit, experts say, due to the fact they are among the highest industrial and commercial users of water in the country, partly because of the agricultural sector.

In dry southern Alberta, the agricultural sector relies on irrigation — the process of watering crops artificially instead of relying on rainfall.

"We're already in the climate catastrophe era," said James Byrne, a geography professor at the University of Lethbridge who has studied climate change for more than 30 years.

The use of water in the southern part of Alberta is restricted. New licences for water can't be issued; they must be purchased from existing licence holders.

But even the current allocation of water licences in southern Alberta could come under stress due to extreme weather variability, said University of Lethbridge geography professor Stefan Kienzle.

"We have allocated 100 per cent of our water. We cannot allocate any more," Kienzle said. "The biggest threat facing southern Alberta is multi-year droughts … maybe the [irrigators] can get away with scraping by two years.

"But if you have a drought that is longer than two years, you are done. Irrigation is done. The productivity is done. We will all scramble for water as municipalities and industries to keep our faucets going."
A study out of the University of British Columbia released last year found that one in four Alberta households face water shortages.
The mining industry in the South Saskatchewan Basin is fighting back against provincial and federal refusals to approve new coal projects, largely because of the water shortage. One producer, Benga Mining, is appealing these decisions.*
But in southern Alberta and elsewhere across the province, it's the combined weight of human activity that is taxing an already limited water supply, said Katie Morrison, conservation director with the southern Alberta chapter of the Canadian Parks and Wilderness Society (CPAWS).

Heavy forestry, motorized recreation and industrial use are having a big impact on the resource, Morrison said.
* Benga is operated by Riversdale Resources. Its chief executive, Tad Watroba, is said to be the close aide to Gina Reinhart, Australia's controversial Queen of Coal.