Well, That Was Certainly Discouraging 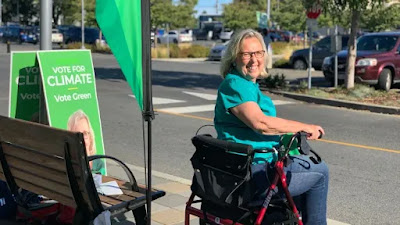 The CBC captured a photo of Elizabeth May campaigning, sitting in her walker waving at passing cars.  Elizabeth May, whom Susan Riley extolled as the "hardest-working MP on Parliament Hill" now apparently laid low, alone at the side of the road. This may be a metaphor for the party itself that has managed to take last place, behind Maxime Bernier's PPC, even as the climate emergency rages unchecked across the world, pole to pole.

Meanwhile the Greens' erstwhile leader, Annamie May, has campaigned in just two ridings - the one she's trying to win and a neighbouring riding in Toronto.

As Ms. May enjoys the last of the summer sunshine, the Glasgow climate summit, COP 26, is just three months away. This summer has seen climate breakdown go into overdrive. Temperature records broken, entire towns literally erased, torrential rains triggering floods that resemble ocean breakers as they race through towns in Europe and eastern U.S. sweeping away cars and digging out roadbeds, wildfires on a scale we've never known and choking smoke that blankets entire cities and regions, drought and crop failures bringing food insecurity to nations historically known as the world's breadbaskets.  All of this and more, right here at home and yet the Greens are fading.

Congratulations are due to Messrs. Trudeau, O'Toole and Singh for they have taken the pulse of the nation. They realize that Canadians don't see this as a real emergency. The voting public doesn't want to hear the hard truths. They're perfectly content with meaningless bromides about cutting greenhouse gas emissions by this percentage or that, by this year or that, the same garbage that's been spoon fed to them by leader after leader, election after election.

We don't care. We don't want to know. Has it escaped you that these targets have no connection to any tangible result? There's no objective, no promise. There's not even any accountability. It's all too vague, too obscure, too easily forgotten.