Scab Pickers. That's All They Are. 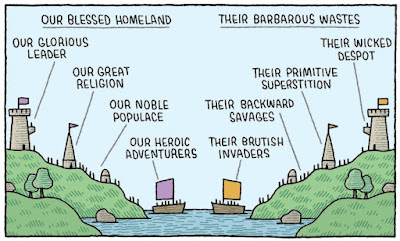 I don't know that it matters much who wins on Monday. The country will muddle along undefended, unprepared, neglected by Team Trudeau or Team O'Toole, grey suits stuffed with wet cardboard.

I heard an ad yesterday. It was Justin assuring voters not to waste their votes on the Greens or New Dems because it was only the Liberals that had a clear policy on climate change.  My first thought was haven't you been in power for the past six years? Where has this magical-policy been all these years?

Of course Trudeau has shown us repeatedly during his reign that he's a pathological bullshitter. He'll say whatever he thinks will work.

Here's a great one. Canadian Press is reporting that Trudeau is now saying he's open to reconsidering electoral reform if only we forget about his past betrayal and leave him in power. This guy has balls of brass and he's a scoundrel, a very sincere, soft-spoken ratbag.

I've spent a bit of time recently pondering what the next government will do in the two, three or four years of its tenure. Probably more diddly-squat than anything.

Politics today is about politics, not the needs and wellbeing of the country. In the rare event where something is done it first must pass the partisan politics test of "what's in it for us?"  The main parties, both government and opposition, are in permanent campaign mode. Cooperation? Screw that.

We don't solve challenges any more. They're far more useful to entrench discord and attribute blame. The great problems of our day, some of them potentially existential, can wait.

In this type of parliamentary dysfunction wounds never heal. They're constantly re-opened, kept festering.  Social cohesion is aborted. Tribalism takes its place. Instead of leadership, vision, the public is fed a diet rich in fear and suspicion and anger.

On Monday the scab pickers will figure out who won what, who lost what, and then they'll get back to the dark art of sowing division.