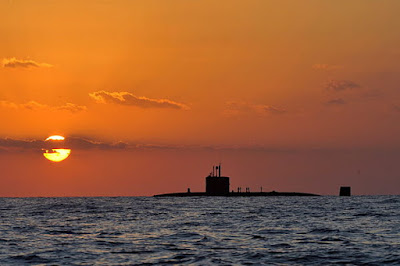 In response to Canada's half-assed efforts to defend its sovereignty in the Arctic, the Brits have offered to throw us a lifeline.

Nobody in Ottawa has been paying much attention to the militarization of the high Arctic by Russia and also China.  To counter this, Canada's underwhelming response has been to order a bunch of over-priced Arctic patrol vessels, what any possible adversary would call "targets."  It's been a real boost to the security of Irving shipyards but that's about it. If they were ever needed to resist an adversary they could well be resting on the bottom within 24 hours, 48 at the outside.

Her Majesty's Royal Navy wants to put some teeth in Canada's Arctic defence with a nuclear submarine presence and taking part in land and air exercises while there's still some ice up there.

Canada fears that its Arctic sovereignty, that it's not prepared to defend, will be compromised if the Brits pick up our slack.  The Brits operate six fleet submarines, nuclear powered but not carrying ICBMs.  Canada has four diesel powered fleet submarines but rarely can more than one be ready for service. They're old. They were junk when Chretien ordered them second-hand after they were rejected by the Royal Navy. They're junk now.