On This, Our Electoral Sabbath 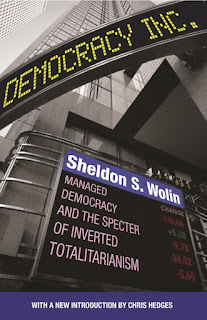 As we go to the temple of the ballot box, it's an appropriate time to reflect on the imperiled state of democracy in  the 2020s.

There's an idea making the rounds about "inverted totalitarianism." Think of "managed democracy" which is, itself, a more respectable name for illiberal democracy.

The idea that the United States has long ceased existing as a democracy was the subject of the late Sheldon Wolin's 2017 tome, "Democracy Incorporated."

Democracy is struggling in America — by now this statement is almost cliché. But what if the country is no longer a democracy at all? In Democracy Incorporated, Sheldon Wolin considers the unthinkable: has America unwittingly morphed into a new and strange kind of political hybrid, one where economic and state powers are conjoined and virtually unbridled? Can the nation check its descent into what the author terms “inverted totalitarianism”?

Wolin portrays a country where citizens are politically uninterested and submissive — and where elites are eager to keep them that way. At best the nation has become a “managed democracy” where the public is shepherded, not sovereign. At worst it is a place where corporate power no longer answers to state controls. Wolin makes clear that today’s America is in no way morally or politically comparable to totalitarian states like Nazi Germany, yet he warns that unchecked economic power risks verging on total power and has its own unnerving pathologies. Wolin examines the myths and mythmaking that justify today’s politics, the quest for an ever-expanding economy, and the perverse attractions of an endless war on terror. He argues passionately that democracy’s best hope lies in citizens themselves learning anew to exercise power at the local level.
Have Canadians not become passive, submissive? Are we not ruled by a managed democracy, the wheels greased with lies and empty promises? Have our governments not yielded our democratic sovereignty through so called "free trade" agreements that are anything but free? Have we not allowed corporatism - fossil energy giants, the big accounting houses, shady outfits such as SNC Lavalin - to insinuate themselves between us and those we elect to high office?
You'll remember Justin Trudeau's #2 man, Morneau, who, without thinking twice, consigned Canadians to the "gig economy" telling working Canadians to roll over and die. When was the last time a Canadian government stood up for much less promoted organized labour? How did majority government become a vehicle for the political caste at the expense of the electorate? When did you last have a real voice in how your country was to be governed?