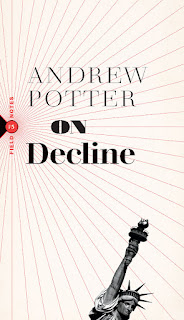 I can't think of the last time I agreed with National Post columnist, Terry Glavin. This could be a first.

In his latest column, Glavin agrees with a former mentor, Andrew Potter, that the western world is indeed in decline.

It’s not what you would call a cheerful book, but it may be taken as a vindication by those of you who are already persuaded that the world seems to be going to hell in a handcart. Andrew Potter’s “On Decline” provides an abundance of hard evidence that you’re not just being a miseryguts about everything, and it’s not just the company you keep, and you’re not, in fact, wrong.

...it’s long past time to give our heads a shake and come to terms with reality. No matter how willingly we surrender to the delusions our political elites encourage in us, sooner or later the facts will intrude and force us to face them. As potter says, “It’s time we accepted that we’re in a state of decline.”

It’s not as though there’s anything new about the future looking grim. The boomer generation grew up in the certain dread of either an imminent nuclear apocalypse or mass famine owing to a human population that was expected to continue expanding exponentially until the planet was inevitably incapable of feeding and sustaining our species. As things turned out, we haven’t nuked ourselves into oblivion, and the earth’s human population is expected to level off and go into steep decline well before the end of this century.

But Potter acknowledges all this, and goes further. For about 150 years, with more than a few grotesque collapses into barbarism, there’s a steady pattern of civilization’s inexorable rise. The arc of history bends in the direction of “progress,” as the word was once understood, and it’s bent in that direction by the pre-eminence of reason, liberal democracy and the rule of law. All those charts and graphs that show up in the works of Steven Pinker and other optimists are headed towards light, not darkness. They’re among the most obvious universal benefits of the Enlightenment.
Stealing from the Past and Pillaging the Future.

Potter’s point is that we’ve been living off the fruits of that bounty, and for all the astonishing achievements in digital technologies over the past few decades, it’s all been built upon achievements from our grandparents’ time. “We’re spinning our wheels,” Potter argues, “and we have been for a few years now.”

In the world’s advanced economies, real wages and salaries among the middle class have barely budged since the 1970s. Housing, education and health-care costs continue to go through the roof. A single-income household with several children, once the norm among the working class, is now a way of life reserved for the rich.

...In Canada, a $10-a-day daycare subsidy, one of Prime Minister Justin Trudeau’s selling points during the just-concluded federal election campaign, is supposed to be a big deal. We boast about our immigration rates being among the highest n the world, but Canada’s population would shrivel without a constant stream of newcomers because this is a country where millions of people can’t even afford to have children.

Even so, after the votes were counted Monday night, Trudeau declared: “Thank you, Canada, for casting your vote, for putting your trust in the Liberal team, for choosing a brighter future.”

But it’s not easy to imagine a bright future when our governments can’t seem to get anything done. From the big stuff — meeting global carbon-emissions targets — to the relatively smaller stuff of being able to pay wages, Canada’s predicament is typical.
The persistent power of magical thinking burns brightly inside each of us.

...Central to Potter’s thesis is the proposition that the Enlightenment did not eradicate the magical thinking of superstitious preliterate societies. Unreason has lingered, on the right and on the left, and we’re all submitting to rigidly enforced belief systems that affirm irrational beliefs rather than illuminate the real world all around us. It is not as though we’ve reached the Enlightenment’s summit and pulled up the ladder behind us, Potter contends. “Life will simply get more and more difficult every year as earth’s remaining humans retreat even further into their various tribes.”

The future is not written in stone tablets. But things are not going to get any better, any time soon.
On the right and on the left, unreason often prevails and we're about to pay for that as we retreat into our "various tribes."
I began writing about this during the Harper years when it became clear that the arch-Conservative prime minister was simply not dealing with important matters of state that he disliked or did not appeal to his ideology. Back then I branded Harper a "fractional prime minister." On matters such as foreign policy, domestic policy and the economy, Shifty Steve cherry picked what he would do and outsourced the rest while blocking public access to their own government.
And to expedite his fundamentalist-driven policy making, Steve loves to clear the decks of unwanted, extraneous factors like facts and science. Extraneous things, like the census. That's nothing but a huge bag of those dirty facts. And science! Why the federal public service is full of scientists busy doing, well, science things. We can't be having that bunch of loudmouths spouting off information. Nobody needs to hear that, especially our fractional prime minister. Best we simply gag them.

When you add up all these deficiencies, it's easy to come out with the 3/8ths of a prime minister result. Steve doesn't want to lead Canada. Steve wants to run Canada's economy and he thinks it's fine to run it free of facts and science and reality. It comes right back to his raging fundamentalist instincts and that's just sad.
Against that low bar, Justin Trudeau is an exemplar but that's faint praise at best.  Unlike Harper, he's not setting fires.  Passively watching them seems to better suit Trudeau the Lesser.