In Search of a Real Government 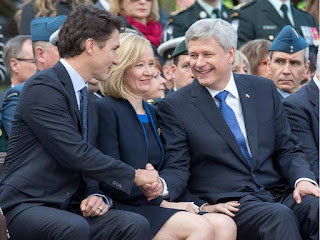 There was a time when governing Canada meant dealing with all issues critical to the wellbeing of the nation. No prime minister was ever entirely successful at that. All had their priorities. Yet it was Stephen Harper who truly put paid to the idea, favouring ruling the country over governance.

In 2013 I wrote of Canada's "fractional prime minister."  Based on important issues that Harper flatly ignored I rated him as 3/8ths of a prime minister.

To expedite his fundamentalist-driven policy making, Steve loves to clear the decks of unwanted, extraneous factors like facts and science. Extraneous things, like the census. That's nothing but a huge bag of those dirty facts. And science! Why the federal public service is full of scientists busy doing, well, science things. We can't be having that bunch of loudmouths spouting off information. Nobody needs to hear that, especially our fractional prime minister. Best we simply gag them.

The one thing above all else that Harper exiles from his policy making is the reality of climate change what he, not that many years ago, dismissively denounced as a "Socialist plot." He claims that he's seen the light but actions speak louder than words and Harper's lack of action speaks volumes. As Harper's longtime buddy, Tom Flanagan, acknowledged, Steve's stock in trade is in “appearing to make a difference without actually changing anything.”

So Steve doesn't actually deal with problems but he's a master at planting the illusion in the public's mind that he's making a difference without actually doing anything in reality. And so a great many relevant facts and circumstances never are allowed to intrude on Steve's decision making which then becomes conveniently detached from reality.

When you add up all these deficiencies, it's easy to come out with the 3/8ths of a prime minister result. Steve doesn't want to lead Canada. Steve wants to run Canada's economy and he thinks it's fine to run it free of facts and science and reality. It comes right back to his raging fundamentalist instincts and that's just sad.
Sideshow Steve lost his mind in the runup to his Waterloo in 2015.
Steve's is going to be one of those political obituaries written for second or third-raters. He won't be enshrined with Laurier, Diefenbaker, Pearson, Pierre Trudeau, MacDonald or even Mulroney. Those prime ministers actually did something for our country. Lord knows they weren't perfect but they had a vision of making this place better and they brought change that mattered and lasted.

Shifty Steve won't be remembered that way. He never had any vision for Canada. His former BFF, Tom Flanagan, described Steve as a guy who positively abhorred vision.
There's no great moment that emerges from Harper's reign. He didn't forge a country. He didn't build anything monumental, lasting. He didn't defend the country or enshrine our democracy. He didn't unite Canadians and prepare them and their country for the future.

He quite deliberately weakened Canada and, at every turn, sought to divide our people. In lieu of vision he employed secrecy, deception and fearmongering. He lied and lied and lied.
If you were to judge Justin Trudeau by the spectre of the guy he replaced, this prime minister doesn't look all that bad. But that's setting the bar awfully low, faint praise.
Justin Trudeau was elected to do things, given a solid majority to make them happen, and he quit on us. Harper is a name easily forgotten. Trudeau, well that has lasting power, a certain cachet. But that's thanks to his father. The brand has not been served well by the son. Neither has this divided nation.