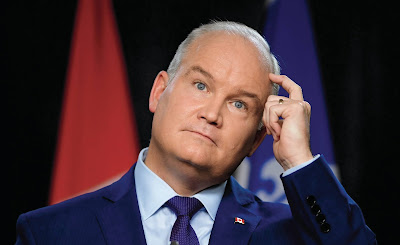 I guess Lorne Gunter simply can't hold his tongue, even with an election just three days away.

No doubt about it. O'Toole has lost The Grunter.
Time and again, O’Toole seems to cower and say, “Oh, please forgive me for daring to have alternate ideas. Give me a minute and I’ll cut and paste the relevant pages from the Liberal Red Book into the CPC policy manual.”

The latest example is the Conservative leader’s ever-evolving stance on carbon taxes.

To win the Conservative leadership last year, “True Blue” O’Toole was steadfastly against carbon taxes, especially the Liberal government’s federally imposed “carbon pricing.”
This which-way-is-the-wind-blowing vacillation only serves to make O’Toole look weak with his own voters, while I suspect at the same time it fails to win him new voters among suburbanite Ontarians and Quebecers.

By mimicking the Liberals at every turn, maybe — maybe — O’Toole is convincing voters they can have Liberals policies without having to have the smarmy, vacuous Justin Trudeau as prime minister.
The Grunter probably broke out in hives while struggling not to endorse Maxime Bernier but he does have a following and this un-endorsement won't help O'Toole come Monday.