It's nearing that time again when the community of nations gathers to figure out what in hell to do about climate change. Round 26, Glasgow, November 1-14, 2021.  It reminds me a lot of Lucy and Charlie Brown and that damned football - if Charlie Brown fell for Lucy's empty promises 26 times.

This year is going to be different. Where have we heard that before, 25 times before?

In 2015 a star rose in the east and a newly minted prime minister with a celebrated name strolled onto the floor of the Paris climate summit to boastfully proclaim "Canada's back." No longer would Canada be a climate pariah. Stephen Harper had been vanquished, sent packing.  Canada was to again become a leader in the fight to arrest global warming.  Yeah, well.

This year will be different, right? Sure.

Every one of the world’s leading economies, including all the countries that make up the G20, is failing to meet commitments made in the landmark Paris agreement in order to stave off climate catastrophe, a damning new analysis has found.

Less than two months before crucial United Nations climate talks take place in Scotland, none of the largest greenhouse gas emitting countries have made sufficient plans to lower pollution to meet what they agreed to in the 2015 Paris climate accord.

This means the world is barreling towards calamitous climate impacts.
I know, I know. That sounds bad, depressing in a way. Good grief!
Climate Action Tracker has produced a summary of the good guys and the rest: 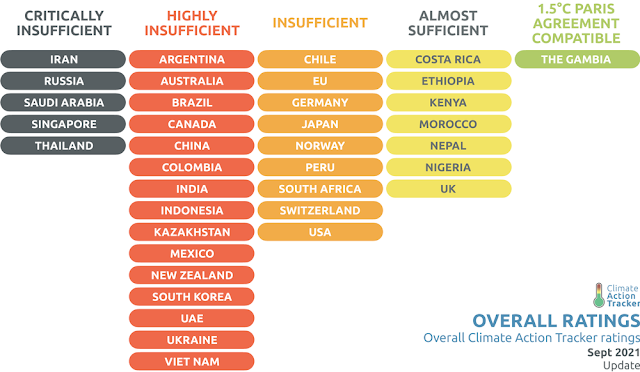 Canada is right up there with Brazil and China, India, Kazakhstan and Ukraine.  We're in the immensely popular fourth tier, the good-for-nothings. A tad better than the fifth tier, the debauchees. A tad worse than the third tier scoundrels. A good measure worse than the second tier rascals. And then there's the first tier - Gambia. Who?
Canada may be represented by a scarred and thread worn prime minister, the guy from 2015, who is pimping one pipeline. On the other hand we may put forward another fresh prime minister, a guy who is vowing to push through two pipelines, the Trans Mountain and a resurrected Northern Gateway.
Governments are supposed to periodically improve their emissions reduction targets in order to fulfil the promises made in Paris but progress has “stalled” this year, the researchers said.

“Anyone would think they have all the time in the world, when in fact the opposite is the case,” he added.