About that Volcanic Eruption in the Canary Islands 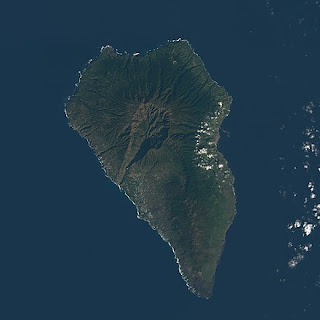 When I read "La Palma" the story got my attention.

Some years ago there was a documentary about a mega-tsunami threat to the US eastern seaboard resulting from a huge slide into the sea at the seismically volatile La Palma.  The documentary was based on a research paper by two American geophysicists, Steven Ward and Simon Day.

Steven N. Ward and Simon Day in a 2001 research article proposed that a Holocene change in the eruptive activity of Cumbre Vieja volcano and a fracture on the volcano that formed during an eruption in 1949 may be the prelude to a giant collapse. They estimated that such a collapse could cause tsunamis across the entire North Atlantic and severely impact countries as far away as North America.
Their theory was that the Cumbre Vieja volcano could trigger an en masse collapse of the western side of La Palma triggering a massive tsunami that could sweep the Atlantic coast of North America.
Since Sunday La Palma has endured a volcanic eruption. A quick check confirmed it is the Cumbra Vieja volcano.

Intensifying volcanic explosions on the Spanish island of La Palma have forced firefighters to retreat and authorities to evacuate three more towns, while airlines cancelled flights because of a cloud of gas and ash, the biggest since the volcano erupted.

Firefighters pulled out of cleanup work in the town of Todoque on Friday afternoon as a new vent opened up in the flank of the volcano. Videos shared on social media showed a massive shockwave emanating from the eruption site.
Authorities in Tenerife have decided to evacuate towns in the volcano's path.
A more recent paper summarized the Ward and Simon findings:
Cumbre Vieja is the fastest growing volcano among all the Canary Island volcanoes (Carracedo et al., 1999) and, hence, may pose the largest threat of a flank collapse, i.e., a large scale subaerial landslide that would propel a large volume of rock into the ocean. Such a slide could be triggered, e.g., by moderate seismicity related to volcanic activity. Ward and Day (2001) were the first to study tsunami generation and propagation from an extreme CVV western flank collapse scenario. In their worst case scenario simulations, they assumed that a large block, about 500 km3 (25 km long, 15 km wide and 1,400 m thick), would break away and spill westward into the ocean. The slide material would end up covering about 3,500 km2 on the seafloor, at 4000 m depth, and during its tsunamigenic time duration, would create an initial surface elevation reaching 900 m in height. In this still somewhat controversial study, this initial surface elevation would evolve into a large wavetrain whose leading wave would be on the order of hundreds meters (about 500 m after 10 min and 150 m after 30 min). Waves would propagate away from the island as circular fronts with a progressively decaying elevation. According to Ward and Day, in the far-field, waves would still be large, reaching 10-25 m off of the US east coast. Both their catastrophic landslide scenario and models used for tsunami generation and propagation were questioned in later work.
Imagine a tsunami, 30 to 75 feet in height, hammering America's eastern seaboard before sweeping dozens of miles inland.
UPDATE:
Cumbre Vieja is becoming more explosively active.
Intensifying volcanic explosions on the Spanish island of La Palma forced firefighters to retreat and authorities to evacuate three more towns on Friday, while airlines cancelled flights due to a cloud of gas and ash, the biggest since the volcano erupted.

Firefighters pulled out of clean-up work in the town of Todoque on Friday afternoon as a new vent opened up in the flank of the volcano and a massive shockwave emanating from the eruption site could be heard on videos shared to social media.