What a Difference a Generation Can Make 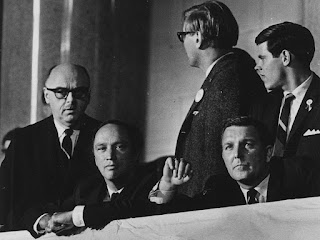 Dozens of angry protesters, who outnumbered Liberal supporters, gathered near the Bolton rally and began chanting obscenities before Trudeau could make his address.

Trudeau said the event was cancelled because they couldn't ensure people's safety at the event.

He added that he has never seen this level of anger or intensity on a campaign trail, including his time as a kid when campaigning with his father, former prime minister Pierre Trudeau.

"I think this is something that Canadians, all of us, need to reflect on, because it's not who we are," he said.
This has to rekindle memories of another campaign event, 53 years earlier, when newly minted prime minister Pierre Trudeau was vowing to fight Quebec separatism.  Trudeau the Elder took a front row seat overlooking a St. Jean Baptiste parade in Montreal.  A riot ensued. Other officials fled as rioters threw rocks and bottles. Security tried to usher PET to safety. Instead, he shook them off and returned to his seat, defiantly staring down the rioters.
It may be unfair to compare father to son. Perhaps, perhaps not. Either way, we may never know his kind again.
On a different note, what does it say for our society that election campaigning can be derailed by vulgar mobs out to disrupt such events? Should a gaggle of anti-vaxxers be given the power to attack our democratic process? Are we heading for Trump-style rallies held with screened audiences in airport hangars?
I don't have a lot of time for anti-vaxxers, especially with the spread of the Delta variant. Their flaccid arguments are dispelled when we look to what's happening in America's slave states where their ilk hold sway and their hospitals struggle to cope with the aftermath.  These people are a public health menace - period.