War in the Anthropocene - A Silver Lining? 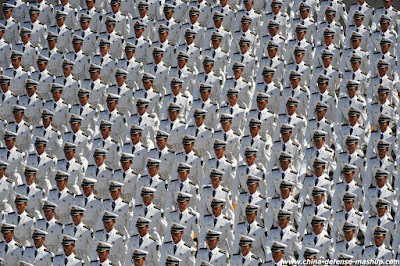 What if governments become so overwhelmed with the demands of disaster relief that they couldn't contemplate military adventures, not even a Cold War?

Author Michael Klare considers the West's current bete noire, China, and concludes that China won't be much of a threat contrary to the fearmongering coming out of America's defence establishment.

“China has invested heavily in new technologies, with a stated intent to complete the modernization of its forces by 2035 and to field a ‘world-class military’ by 2049,” Secretary of Defense Lloyd Austin testified in June. The United States, he assured the Senate Armed Services Committee, continues to possess “the best joint fighting force on Earth.” But only by spending countless additional billions of dollars annually, he added, can this country hope to “outpace” China’s projected advances in the decades to come.

As it happens, however, there’s a significant flaw in such reasoning. In fact, consider this a guarantee: by 2049, the Chinese military (or what’s left of it) will be so busy coping with a burning, flooding, churning world of climate change — threatening the country’s very survival — that it will possess scant capacity, no less the will, to launch a war with the United States or any of its allies.

It’s normal, of course, for American military officials to focus on the standard measures of military power when discussing the supposed Chinese threat, including rising military budgets, bigger navies, and the like. Such figures are then extrapolated years into the future to an imagined moment when, by such customary measures, Beijing might overtake Washington. None of these assessments, however, take into account the impact of climate change on China’s security. In reality, as global temperatures rise, that country will be ravaged by the severe effects of the never-ending climate emergency and forced to deploy every instrument of government, including the People’s Liberation Army (PLA), to defend the nation against ever more disastrous floods, famines, droughts, wildfires, sandstorms, and encroaching oceans.
China, by virtue of its vast size, will be hit by the gamut of climate change impacts - droughts in the agricultural north, flash floods and sea level rise in the industrial southern coastal regions, water and food insecurity, everything that results from severe weather events of increasing frequency, intensity and duration.
To grasp the severity of the climate crisis China will face, look no further than the recent flooding of Zhengzhou, a city of 6.7 million people and the capital of Henan Province. Over a 72-hour period between July 20th and July 22nd, Zhengzhou was deluged with what, once upon a time, would have been a normal year’s supply of rainfall. The result — and think of it as watching China’s future in action — was flooding on an unprecedented scale and, under the weight of that water, the collapse of local infrastructure. At least 100 people died in Zhengzhou itself — including 14 who were trapped in a subway tunnel that flooded to the ceiling — and another 200 in surrounding towns and cities. Along with widespread damage to bridges, roads, and tunnels, the flooding inundated an estimated 2.6 million acres of farmland and damaged important food crops.
In response, President Xi Jinping called for a government-wide mobilization to assist the flooding victims and protect vital infrastructure. “Xi called for officials and Party members at all levels to assume responsibilities and go to the frontline to guide flood control work,” according to CGTN, a government-owned TV network. “The Chinese People’s Liberation Army and armed police force troops should actively coordinate local rescue and relief work,” Xi told senior officials.
...eventually some 46,000 soldiers from the PLA and the People’s Armed Police were deployed in Henan to assist in relief efforts, along with 61,000 militia members.
Flash flooding is becoming a global nightmare. Central Europe, especially Germany, has been hammered this summer.  Parts of Tennessee reeled from 17 inches of rainfall on Saturday.  It resulted in walls of water that created scenes like this: 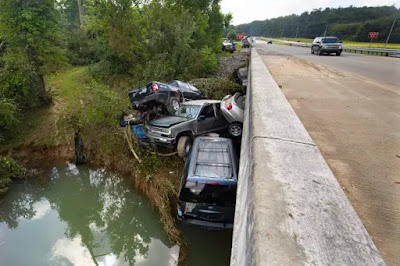 A physical phenomenon known as the Clausius-Clapeyron equation shows that for every 1 degree Celsius (1.8 degrees Fahrenheit) of warming, the atmosphere can hold 7 percent more moisture. Because the relationship between temperature and moisture isn’t linear, even small amounts of warming can create exponentially wetter storms.

The complex array of factors that contribute to a flood can complicate efforts to quantify climate change’s role. But research shows that warming makes events significantly more extreme.
Several years ago I wrote of a pastoralist in the African Sahel who, like his ancestors for centuries past, supported his family by herding cattle. In one year he lost half his herd to drought. The next year he lost the rest to flash floods.  The rancher and his family had to leave their land for a life of poverty eking out as subsistence living in the slums of Dakar.
Klare writes that China's crop of new mega-cities have an Achilles Heel. They were engineered for a climate now long past.
Ominously, that event also exposed significant flaws in the design and construction of China’s many “new cities,” which sprouted in recent years as the Chinese Communist Party (CCP) has worked to relocate impoverished rural workers to modern, highly industrialized metropolises. Typically, these urban centers — the country now has 91 cities with more than a million people each — prove to be vast conglomerations of highways, factories, malls, office towers, and high-rise apartment buildings. During their construction, much of the original countryside gets covered in asphalt and concrete. Accordingly, when heavy downfalls occur, there are few streams or brooks left for the resulting runoff to drain into and, as a result, any nearby tunnels, subways, or low-built highways are often flooded, threatening human life in a devastating fashion.
China's aging dams.
Low-lying areas of eastern China, where most of its population is concentrated, have always suffered from flooding and, historically, one dynasty after another — the most recent being the CCP — has had to build dams and embankments to control river systems. Many of these have not been properly maintained and were never designed for the sort of extreme events now being experienced. During the Henan flooding in July, for example, the 61-year-old Changzhuang Reservoir near Zhengzhou filled to dangerous levels and nearly collapsed, which would have inflicted a second catastrophe upon that city. In fact, other dams in the surrounding area did collapse, resulting in widespread crop damage. At least some of the PLA forces rushed to Henan were put to work building sandbag walls to repair dam breaches on the Jialu River.
The IPCC outlook for Asia is grim.  Beijing will have its hands full dealing with its own bevy of crises.
Such onrushing realities will result in massive urban flooding, widespread coastal inundation, dam and infrastructure collapses, ever more severe wildfires, disastrous crop failures, and the increasing possibility of widespread famine. All of this, in turn, could lead to civic unrest, economic dislocation, the uncontrolled movements of populations, and even inter-regional strife (especially if water and other vital resources from one area of the country are diverted to others for political reasons). All this, in turn, will test the responsiveness and durability of the central government in Beijing.
Does this rule out war between China and the U.S.? No. It does, however, demonstrate that Beijing may have other priorities than cold or hot military clashes with America.  Of greater concern may be the Himalayan headwaters, most of which originate in Chinese occupied/annexed Tibet.  Pakistan, India and China depend on access to those headwaters but China may be tempted to divert those rivers to meet its own needs. Remember, all three countries have nuclear weapons arsenals.
So far, both China's and America's military leaders have been reluctant to allow climate change to reshape their mission.
No doubt senior PLA officials are fully aware of the climate threats to China’s security and the ever-increasing role they’ll be forced to play in dealing with them. However, the most recent edition of China’s “white paper” on defense, released in 2019, didn’t even mention climate change as a threat to the nation’s security. Nor, for that matter, did its closest U.S. equivalent, the Pentagon’s 2018 National Defense Strategy, despite the fact that senior commanders here were well aware of, even riveted by, such growing perils.
Sandbagging river banks, fighting forest fires or evacuating entire communities are occupations that don't justify new generations of stealth bombers and hypersonic weaponry. Eventually, however, we will have to put our military into safeguarding our own territory and securing the folks at home.  In our hyper-militarized world that wouldn't be such a bad thing.